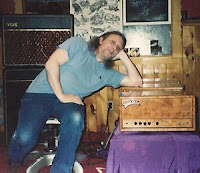 There are a handful of amplifier designers and builders that viewed the guitar and bass amplifier as a musical instrument. After all, the amplifier is the tone box and sound board for the electric guitar.

Leo Fender spent countless hours with Dick Dale, coming up with a guitar amplifier that would produce the sound that Dale needed.

Howard Dumble’s amplifiers are sought after, by those who can afford them, due to their tone-worthy sound.

Dr. Rick Jones, the president and chief designer of Acoustic Image, created lightweight amplifiers that are meant to make jazz guitarists and string basses get that smooth jazz sound.

And Ken Fischer created what might be considered the first boutique amplifier, the Trainwreck amplifier.

Trainwreck took its name from Fischer’s nickname. His passion was not just building amplifiers, but building and riding motorcycles. The reckless behavior of his style of biking gave him the nick name.


After working at the Marcus transformer company, Fischer became hooked on electronics. He did mandatory service in the Navy. For those of you that do not remember the war in Viet Nam mandated compulsory military service known as the draft.

Ken was fortunate enough to study electronics while in the armed service. After completing his tour of duty, he had a number of jobs before he signed on with the Ampeg Amplifier Company. He worked at Ampeg until the company was sold to new owners.


After a few other jobs, including motorcycle repair, Ken opened his amplifier repair and modification company. 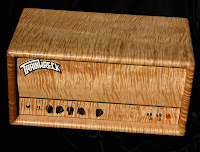 Ken’s goal was to build an amplifier that would behave as a musical instrument. Instead of just amplifying the sound of the guitar, it would compliment and flavor the guitars tone and would do so without the aid of integrated circuits, as those used in stomp boxes and modeling amps.

In his words, “I want an amp to be fast and dynamic. I want to hear the note with multiple layers of harmonic complexity, giving a fat, euphonic, and lyrical tone .I like an amp to have an awesome clean sound, yet rock my world when I dig in. My goal is to make amps that make the soundtrack to people’s lives.”

Fischer understood the concept of harmonics. A subject taught in most music theory courses. Each musical instrument has its own set of complex harmonic overtones that cause it to sound the way it sounds.

Companies that manufacture synthesizer alter the pattern of sound waves and harmonics, so that a synth can sound like a trumpet, violin or Hammond organ.

Through the use of the finest quality parts and experimentation Fischer came up with an amplifier that enhanced the guitars sound.


﻿Trainwreck had its beginnings in 1981 in Colonia, New Jersey. Within a year later Fischer registered the Trainwreck name and was set up as a genuine business, complete with a tax ID. Word of mouth boosted his popularity.
While working at Ampeg, he developed a trouble shooting system that would pinpoint amplifier problems without taking the amplifier apart. Most repairs using this method could be done while the customer waited.

Dean Farley and Aspen Pittman were launching Groove Tubes at the time and invited Fisher to be a dealer. Trainwreck Amp Repair became a “tube amp only” repair business as a result of this venture.

This same year a friend found some old Ampeg 2 X 12 cabinets. They did not have logos, so a friend designed the Trainwreck logo which went on to the cabs. 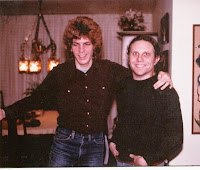 Another friend, Casper McCloud, persuaded Fisher to build a customized amplifier. McCloud was in the original production of Beatlemania and under contract to Atlantic records.


The organization had given him a Mesa Boogie amplifier, but McCloud was not happy with the tone. He preferred the sound of the Vox AC 30. Ken came up with his first amplifier for McCloud. It was a 15 watt model that used EL-84’s. The amp was housed in a gutted Fender amplifier.

A year later Ken went to work building a second amplifier for McCloud. This one produced 30 watts. McCloud’s friends loved the amp and wanted their own “Kenny” amp. Ken called this amp, The Liverpool 30. Although it is similar in ways to the Vox amplifier, Ken’s amp is his own unique design.

Fischer came up his vision of his ultimate amplifier. His first step was to eliminate the need for more than one channel.

Multi-channel amplifiers were in vogue at the time, but Ken felt that mixing circuits compromised the sound and response.

He wanted an amplifier that would immediately respond to pick attack and changes in touch. He eschewed any reverb and felt it a way to make up for amplifiers that sounded dry and flat. It goes without saying this would be a tube amplifier. 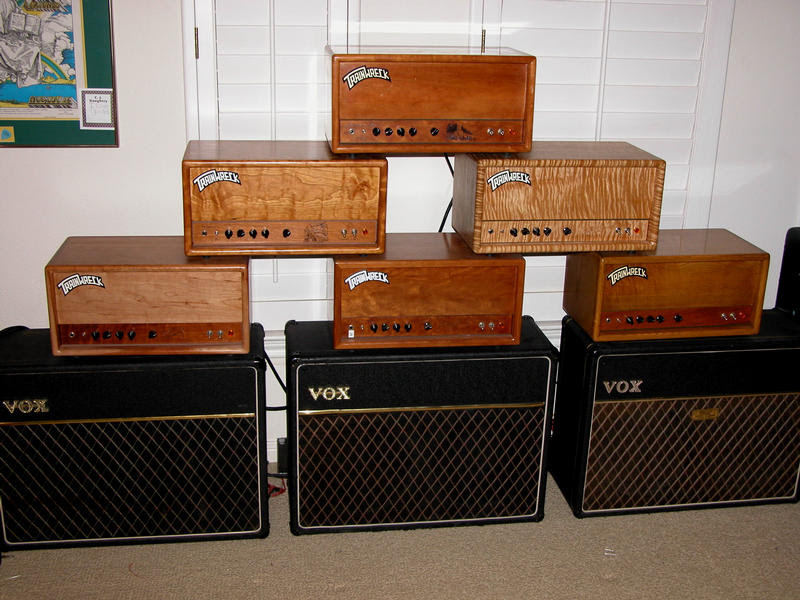 Ken’s sister-in-law came up with the hardwood design for the amplifier heads. This distinctive style set Trainwreck apart from other amps and is still being copied to this day.

Another customer had been playing through 100 watt Marshall Amplifiers. He complained that those amps were too loud and did not get the lead solo tones he was going after. The customer took a Marshall Head to Fischer for modification.

Ken cut the amp down to one channel and one input preamp. He also installed phase inverter circuitry. This mod really beefed up the gain and the harmonics.

Fischer later modded the rest of the customer’s Marshalls by converting them to use 6V6 output tubes and a variac to lower the voltage.

A year later, Fisher later changed this design to use EL-34 power tubes. This amp was named The Express.

One thing you need to know about Trainwreck amps; no two amps sound alike. Each amp was hand built and signed by Fischer inside the cabinet. Each new amp was sold with a signed owner’s manual. 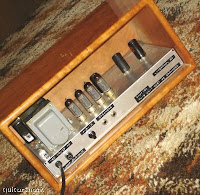 Ken’s blueprint for his ultimate amplifier came down to simplicity. One channel provided better response. In his opinion multiple channels compromised the sound. He eschewed reverb and claimed that it was used as a cover up to improve the sound of amplifiers that sounded too dry.


Ken was equally adamant about not using effects loops. The amp’s sound was good enough. If the guitarist must use effects, they should come in front of the amp to not compromise the amps sound.

Ken went on to build a variety of amps. Each was housed in a hard-wood cabinet with the Trainwreck logo burned into the wood. Ken showed a disdain for what he referred to as “ugly black boxes” that housed most guitar amps.


It was in the year 1988 when Fischer contracted the flu. He never recovered from the particular strain of the virus.

His doctors diagnosed him with an acute form of chronic fatigue syndrome known as CFIDS or chronic fatigue immune dysfunction syndrome with a vestibular (balance) disorder. Outside of the USA this disease is known as M.E. or myalgic encephalomyelitis In July 1994 he was diagnosed with bleeding ulcers. His conditions worsened to the point were he could no longer work. He suffered with this condition for the rest of his life and was forced to quit working.

Ken’s most popular amplifier seems to be the Express, followed by the Liverpool and the Rocket. A music dealer called Ultra Sound Amp Sales stocks a few Trainwreck amplifiers.

If you are interested, have a rich uncle or get ready to take out a bank loan. Trainwreck amps range from $35,000 to $45,000 USD. Ultra Sound rents them for $300 a day or $1200 a week. When Fischer started selling his amps, the went for around $600. He could have never believed the price they command these days.

However, if you are interested there are some other options. Komet Amplifiers were designed by Ken Fisher, before his passing.


They are built in cooperation with Trainwreck Circuits© by Komet Amplification and incredibly well made. They sell in the $3600 to $4000 range.

Trainwreck Circuits© is building The New Authorized Trainwreck amplifiers. This venture is lead by a man that wishes to remain anonymous and is referred to only by his initials, J.M. The Fischer family is behind this venture, not to make money, but to keep Ken’s dream alive. J.M. is building the amps in Ken’s original workshop.

﻿﻿
When Fischer reached his 60th birthday, he built an amplifier for himself.  He used whatever spare parts were laying around his workshop and didn’t even bother to produce a schematic for the amplifier.


He wanted an amp that would sound great with his old SG PAF Gibson.

His choice of wood was beautiful and he dubbed this amp, The Songwriter.