The first thing I noticed was the guitar. That is one Unique Guitar! The caption under the picture said “Johnny H and His Henchmen.”

He and his band had a couple of Doo Wop hits in the mid 1960's called I Wish I Really Knew and Baby Good-bye. It was on a New York label called Lordize Records.

He has posted 19 other  recordings on his myspace page, Most are  covers of popular hit songs of the 1950’s and ‘60’s. But what is really amazing, besides that guitar, is his story.

Jesse Haemmerle had been using the name Johnny H as the leader for his band. But he had learned from three family members that his real birth name was Presley. His legal father obtained his birth certificate and it showed his birthday to be January 8th of 1935 and his birthplace was Tupelo Mississippi.

Coincidentally Elvis Aaron Presley was born on that same day, January 8th of 1935 and his birthplace was  also in Tupelo, Mississippi. It is said that Elvis had a twin brother named Jesse, who was declared dead at birth. This baby was named Jesse Garon Presley. This is something that haunted both men throughout their lives.

Jesse says that he was able to meet Elvis in 1964. He tells the story about that time. Elvis rarely talked to anyone about his “stillborn” brother, but on that afternoon when they met, the floodgates opened up and that's all both men talked about for hours.

Was he actually Elvis Presley's twin brother? I do not know if that mystery will ever be solved.

In addition to music Jesse Haemmerle did some film work with Frankie Avalon, he was a contestant on several TV game shows and New York city TV show where he played a singing cop.

He was in several other films in the 1970’s and ‘80’s. Through these connections he met up with a lot of other famous people including Frank Sinatra and Arnold Schwarzenegger.

For much of his life Haemmerle has kept busy as a body builder.

He was  a member of the Federation of Arm Wrestlers as participant as well as a referee.

In 1969 he created and constructed the first opposing grips arm wrestling table.

I have searched in vain to discover more information about his rather bizarre V-shaped guitar. Its rocket-shape is reminiscent of the “space age” era of the early 1960’s, when we were fascinated with rockets and being the first man on the moon.


The V shaped wings and pointed headstock seem to be attached to the guitar more than being a part of it.

When we see it in it’s original form, judging by the headstock, it may possibly be a Martin with a cover on its top. In any event it is a wild and unique guitar.
©UniqueGuitar Publications (text only)

From time to time, I find pictures of guitars and ask to myself, "What the heck was he thinking? That guitar is a complete trainwreck."

And this is not to disparage the wonderful amplifiers that Ken Fisher built.

But then I see something that restores my hope in humanity.

So I am sharing my stash of Trainwrecks and Treasures. Let me know if you agree with me that some of these guitar are hot and some or not.

Posted by marcusohara@aol.com at 9:56 AM 2 comments:

Today we received the shocking news that Glenn Frey, a founding member of The Eagles has died of numerous health issues. He was only 67.

After the band broke up in 1980 he went on to record Smuggler’s Blues, The Heat is On, You Belong to the City and other popular songs.

It was during this era tha Frey went on to "clean up his act" and get in shape by building his body and vigorously working out. He toned up and was featured in a gym campaign commercial and Rolling Stone magazine did an a pictorial article about him

Due to his solo music he went on to act in the police drama Miami Vice. That show that used Smuggler’s Blues as a theme song as well as several of his other songs.


Frey joined the Eagles in 1971 after being in Linda Ronstadts back up band with Don Henley, Randy Meisner and Bernie Leadon.

Frey played guitar and piano during his tenure with  The Eagles.

After the band reunited in 1994 he became the spokesman for the group, since, in his own words, he and Henley had written most of their songs.

The group later went on another world tour in 2008.

In 2012 he release his first solo album since 1994 and it was called After Hours. This album features him performing pop standards of the 1940’s through the 1960’s.

In 2013 a documentary was produced called History of the Eagles.

During his early days with The Eagles Frey was very fond of a 1956 Les Paul Junior that he got from Jackson Browne. The guitar was painted black and and extra P90 pickup was added to the neck position. Frey named this guitar “Old Black.”

Frey also played a tobacco burst Gibson ES-330 TD which was probably a mid 1960’s model. This is the thin hollow-body model with twin P90 pickups. 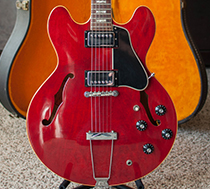 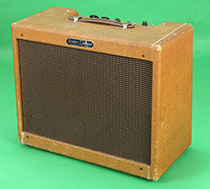 He played these guitars through an early narrow panel tweed Fender Deluxe amplifier which was made no later than 1960, since that was the last year this style was manufactured. Although on the road in the early days he also used a Ferder Deluxe Reverb that was miked.


Frey also owned and played a vintage Gibson Firebird V, a Gibson SG and a 1953 Fender Telecaster. Occasionally he played a 1982 Gibson Moderne Heritage Korina Electric. Gibson only produced 143 of these guitar.

During the Eagles 1994 comeback tour Frey played a Takamine EF360S. He approached the Takamine company and requested they build him an updated version.


Out of this, Takamine Guitars produced the Glenn Frey Signature model EF360FG. This non-cutaway guitar came with a solid wood top and solid rosewood back and sides and Frey's initials "GF" in the headstock..


In the studio, Frey used Martin 6 and 12 string guitars. He played several other electric guitars including an Epiphone Casino and a Rickenbacker 230.

Here is a link to a very interesting article on Glenn Frey from Rolling Stone Magazine.

Posted by marcusohara@aol.com at 7:11 PM 3 comments: