There are some very interesting and innovative guitars coming out of Northern Europe. Last year I wrote about Aristides Guitars that are built in the Netherlands.

I also did an article on Versoul guitars that are manufactured in Finland.


Now I have encountered some exquisite and unique guitars being built in Lucerne, Switzerland with the unusual name of Relish Guitars.


There are two versions of these unique instruments; Jane and Mary. Both are manufactured with a similar body shape, but out of different materials.


Relish Guitars are a venture that was started by partners Pirmin Giger and Silvan Kung who are living their dream of designing and building an exceptional and unusual guitar, by taking a similar approach that artisans took with historical Swiss watchmaking technology.

Jane’s body (the guitar) is based on a milled aluminum frame which serves several functions. The strings attach directly to this frame which enhances their sustain.

The maple neck is bolted directly to the aluminum frame and center bar. The bridge is also attached to the bar. This further adds to the guitars sustain. So although the guitar body is essentially hollow the way the frame and neck are engineered, it provides the resonating factor of a solid body instrument.

The frame also acts has a stable housing for the components, which allows easy access to the guitars inner-workings including swapping out the pickups and changing the battery.

The pickups are connect to a circuit board by means of gold plated connectors that simply unscrew in the event you want to change pickups. Relish Guitars will add the connectors and cables to any aftermarket pickup you send to them.

The circuit board operates the unique LED switching system, which is powered by the battery. Instead of the usual Switchcraft style toggle switch, this guitar comes with two LED’s on the front of the body. By merely touching one or both the pickups go off or on.

The guitars interior work is pristine.

The Jane guitar comes with standard and passive volume and tone potentiometers and twin passive Relish Bucker XV pickups, which are designed and made in-house.

Sandwiched above and below the frame are two sheets of 7 layer wood veneer, that are available in walnut, ash, or cherry. The front and sides attach directly to the aluminum frame.


The veneer cover on the back is routed out and has a second “door” that has a parallel shape to the body.

This door is held in place by magnets and is easily removed with a guitar pick.


The neck is made of solid maple and the headstock comes with Schaller machine heads.


The fretboard is constructed of woven dark bamboo. This material is harder than most fretboard woods and is a sustainable product. It is topped with stainless steel fretwire and has 24 frets. There are no fret markers. 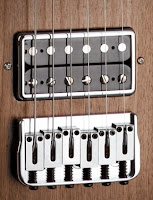 A Hipshot adjustable bridge/saddle assembly that allows the strings to attach directly to the guitars frame.

I have to hand it to Relish Guitars for coming up with such a unique body shape. This double cutaway guitar is not a copy of anything else on the market. The Jane model comes in walnut, ash, cherry, blond flamed, white, gray/black and Bordeaux.

Mary is much different from Jane, as Mary comes with a solid alder frame that is milled on a CNC machine.

The top and back are made of milled plywood that attaches to the alder frame by use of bolts that utilize large o-rings to prevent any vibration.

Unlike the Jane model, the entire back side of the Mary guitar is removable to access the pickup connectors if there is a need to change them out and also to attach the strings to the tone block on the underside of the Hipshot bridge/saddle.

The maple neck is bolted to the alder or ash frame by means of 4 bolts and a metal plate and is hidden away beneath the instruments back veneer.

This guitars neck is topped with a fretboard made of dark woven bamboo  with stainless steel frets. There are no position markers on the fretboard.

Mary comes with twin Relish Bucker XV pickups that are made by the company. The pickups are controlled with a 3-way blade switch.  There is a single volume and a single tone potentiomers with chromed and knurled knobs. The headstock has a veneer that matches the colour of the body.
©UniqueGuitar Publications (text only)

Posted by marcusohara@aol.com at 3:33 PM 2 comments:

The Gibson Byrdland - A Most Unique Guitar

The Byrdland is a stunning looking electric guitar that is made by Gibson. Its name derives from the names of guitarists Billy Byrd and Hank Garland for whom Gibson originally custom built the guitar.

At the time Gibson's president, Ted McCarty, sought opinions and ideas about new products. So in 1955, in collaboration with two of the best Nashville guitars on the scene, Billy Byrd and Hank Garland, Gibson developed the Byrdland guitar. 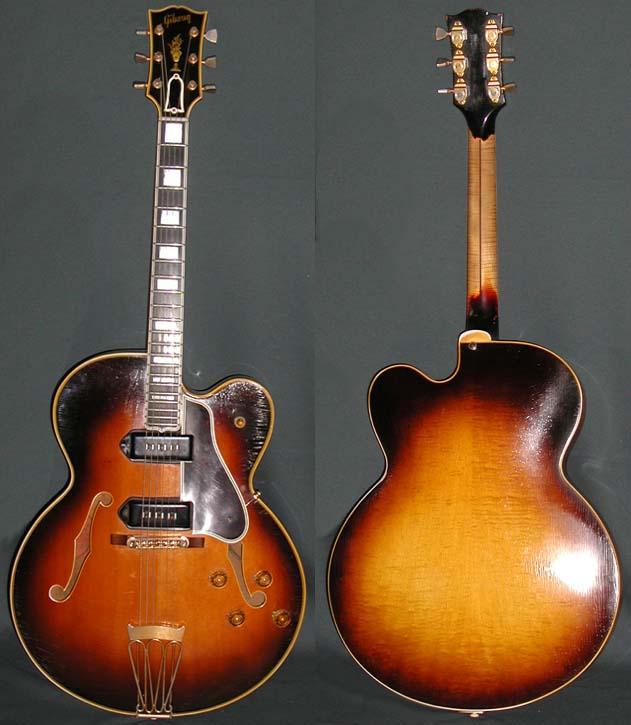 It was later during the design process, Byrd and Garland specified a shorter scale neck.which would help facilitate intricate single-note patterns and unusual stretched chord voicings.

Only three were produced in 1955.. Billy got number one and Hank got number two and then he ordered and purchased a third that had a custom cherry finish. At this time the two prototypes both had natural finishes and Venetian cutaways.

The original instruments were to come with twin Gibson P90 single coil pickups. Although Hank ordered his with a single P90 and a Charlie Christian pickup in the neck position.


This guitar was designed with jazz players in mind. It featured the same 17” wide, 21” long spruce top and body as was on the single cutaway L-5 CES, but the body was shallow. In comparison, the Byrdlands body was only 2 1/4” deep as opposed to the full 3 3/8” body of an L-5.

The headstock was also similar, but narrower to correspond with this guitars short scale neck. The Byrdlands neck was a two full inches shorter than the L-5 CES, based on the Byrdlands scale of 23 1/2 inches.

The production models were equipped with Alnico V pickups. One interesting feature of this guitar is the fact that the two pickups are spaced closer together, because of the shorter scale and the 22 fret neck.

This gives the the Byrdland it’s distinctive sound. In later years the Alnicos were replaced with humbucking pickups.

The headstock and the neck were both bound. The ebony fretboard came with block mother-of-pearl position markers which started at the first fret. The headstock featured the traditional Gibson flower pot inlay.


The Byrdland came with a fancy gold-plated trapeze tail piece that was engraved with Byrdland and the rosewood bridge with topped with a Gibson tune-o-matic saddle. The body was bound as were the guitars F holes.

Hank Garland’s number two and number three Byrdlands both had fancy three loop trapeze tailpieces that were gold plated. Number two had the Charile Christian pickup with a white top plate, which matched the guitars while pearloid pickguard, while number 3 had a black top plate on the pickup. In the following year,

By 1956, Gibson sold 60 units, which was more than the combined sales of L-5’s and Super 400’s. Electric guitarists seemed to appreciate the feel of the narrow body.

The number 3 Byrdland was the guitar that Hank played at the famous Elvis concert in Tuepelo Mississippi in 1957. This was during a period when Scotty Moore and Bill Black had quit the band.


Hanks number three was given back to Gibson in 1957 and was supposed to be archived, however someone mistakenly sold it to a music store in Chattanooga Tennessee. A music teacher there purchased it and had it autographed by Hank Garland.


The Byrdland then became a regular production instrument. Later Gibson developed the ES-350T from the Byrdland using less-costly hardware and detailing, and offered it as a less expensive model.

In the late 1960s, guitarist Ted Nugent began using a Byrdland, which was unusual considering Nugent's style of music.However, in an interview Nugent states that he first saw Detroit guitarist Jimmy McCarty playing a Byrdland back in the early 1960's. 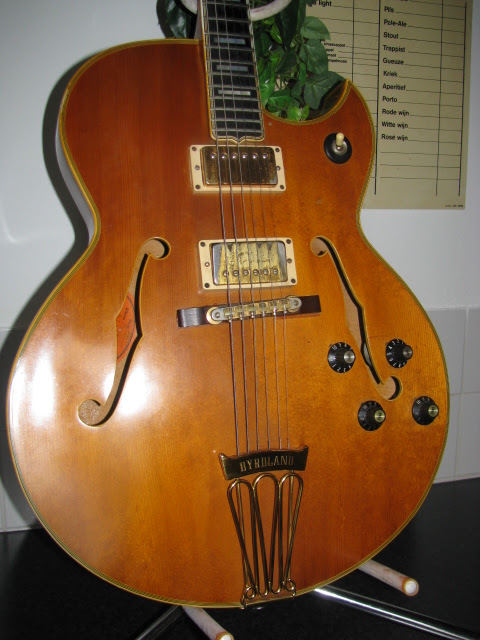 Nugent was amazed at McCarty's ability as a player. At the time Nugent was in a rock band and was the opening act for McCarty's band. McCarty was playing a Byrdland through a Fender Twin amp. Nugent finally saw a Byrdland for sale at a local music store he frequented and was able to trade his Epiphone Casino and a few hundred bucks for that guitar. He has been collecting and playing Byrdlands ever since then.


The hollow-bodied nature of the guitar created feedback issues at higher levels of gain and volume, making it impractical for hard rock and similar styles. Nugent incorporated the controlled feedback of the Byrdland into his playing and continues to use it today. Nugent gives his Byrdlands, and other Gibsons, a custom touch by removing the stock selector switch knobs, and installing Gretsch strap-lock knobs.

The guitar is currently available as part of Gibson's Custom series and is made with the Florentine cutaway. In 1976 only, Gibson offered a twelve-string version, but made fewer than 20. 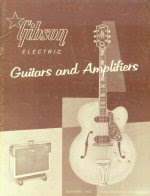 When the instrument was first introduced in the Gibson Guitar catalog, the famous jazz club, Birdland, filed a lawsuit against Gibson over the name. The court dismissed the suit when Gibson showed that the name was made up from the names of two people.

Click on the links for further information.
©UniqueGuitar Publications (text only)

Posted by marcusohara@aol.com at 6:49 PM No comments: