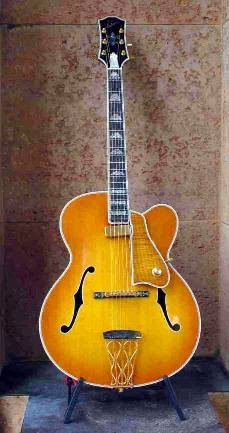 In 1969 Gibson introduced their top of the line model and called it The Citation. It was also their most expensive new model and remains so to this day.

The Citation was designed by then Gibson president Stanley Rendell as a jazz style archtop guitar. In 1969 it sold for $2500, which was more than twice as much as the next most expensive model, The Super 400CESN, which was selling for $1275. The least expensive model was the single pickup Melody Maker ($179.50).

The Citation was made to order. Orders were taken in 1969, but the buyer might not get the guitar for up to 2 years. There were only 8 Citations made and shipped between the years 1969 to 1971.

All models were registered and could have the owners name engraved on the truss rod cover, if they desired. The Citation had a 17” full-depth body with figured maple back and sides. The top was either carved maple or spruce.

The neck was made of figured maple or mahogany. The bound ebony fretboard was decorated with fancy abalone inlays. The 5 piece neck had the little peak at its end.

The headstock was also bound and a fleur d’lis design was inlaid on the front and back of the headstock. The design could be in pearloid, gold pearloid or abalone. “The Gibson” logo was done in script that matched the choice of the owner.

On some models the logo was on the front and back of the headstock. "Gibson" was inlaid on the head stock.  An ovular metal plaque on the back had the registration number engrave on it. 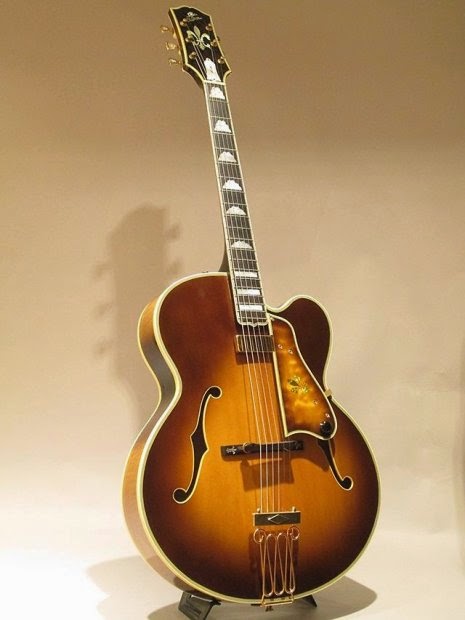 All hardware was gold plated. Tuning keys were fancy Klusons. The gold-plated tune-o-matic bridge saddle stood astride a rosewood or ebony archtop bridge or you could order with a wooden saddle.

The strings attached to a fancy gold-plated trapeze tailpiece. The Citation was equipped with a floating BJB pickup, gold plated of course. And a single gold-plated volume control was mounted on the instruments pickguard. The bound wooden pickguard was made to match the instruments body colour.

The Citation came in Natural or Sunburst finishes. Some were brown-yellow burst and others cherry burst. Some of the design was up to the owner and how much he or she wanted to spend.

The original run ended in 1971, however there was still a demand for this guitar. So it was reissued in 1979 through 1983 and reissued again in 1993. As of 1994 Citation guitar is a part of Gibson’s historic collection and is available only on special order through their custom shop. It is the best hand-carved and handmade guitar that Gibson has ever offered.

The current price for a new Gibson Citation starts at $22,299 and builds depending upon what features you want to add. There is currently a cherry finished 1981 model on eBay listed at $29,900. Another 1996 natural finished model on eBay is listed at $11,995. Musician Friend and Guitar Center both list them at $25,699 USD.

In 1978, Gibson also offered a similar guitar. It was not quite as fancy, but it was a lovely instrument. It was designed by Gibson craftsman Wilbur Fuller and was totally hand-carved and “tuned-by-ear”. After building the first model, the company was so impressed they designated it the Kalamazoo Award guitar. 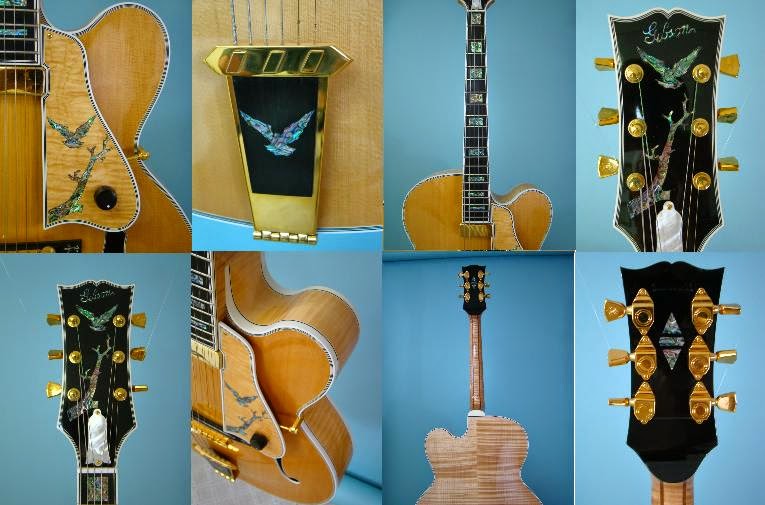 The ebony headstock was bound on the top and a beautiful eagle and branch abalone inlay topped the guitar directly under the word Gibson, which was spelled out in abalone. The back of the ebony headstock featured a diamond shaped inlay done in beautiful abalone.

Fuller was a true luthier that studied with old craftsmen. This was his dream guitar. He worked for the company from 1954 until the last day of 1980 when he retired. He was able to tune the top to “C” and the back to “D”. He actually tuned the tops and backs again after the braces were glued in place.


Fuller did this with a small rubber mallet. He would carve wood off the top, back and bracing until he heard the right tone. He had to take the guitar apart and put it back together until he was satisfied.

If you find one expect to pay upward of $18,000. They are rare, handcrafted and works of art.

The Epiphone Genesis Guitars and Bass 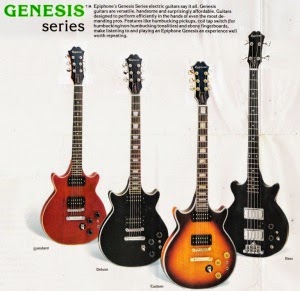 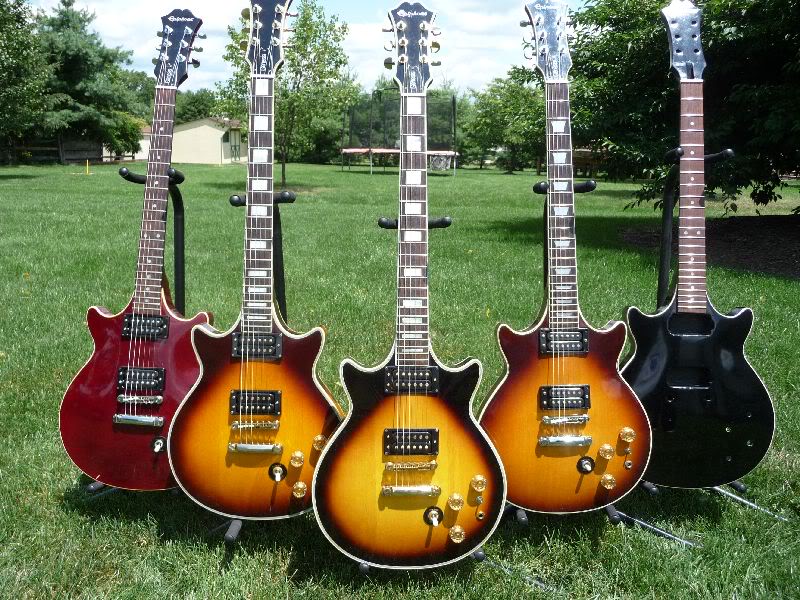 In 1980 a Genesis Student model was in the catalog as was a Genesis Bass, although it is not certain that any student models were every actually manufactured.


The Custom and Deluxe models were available with either an Ebony or Dark Sunburst finish. 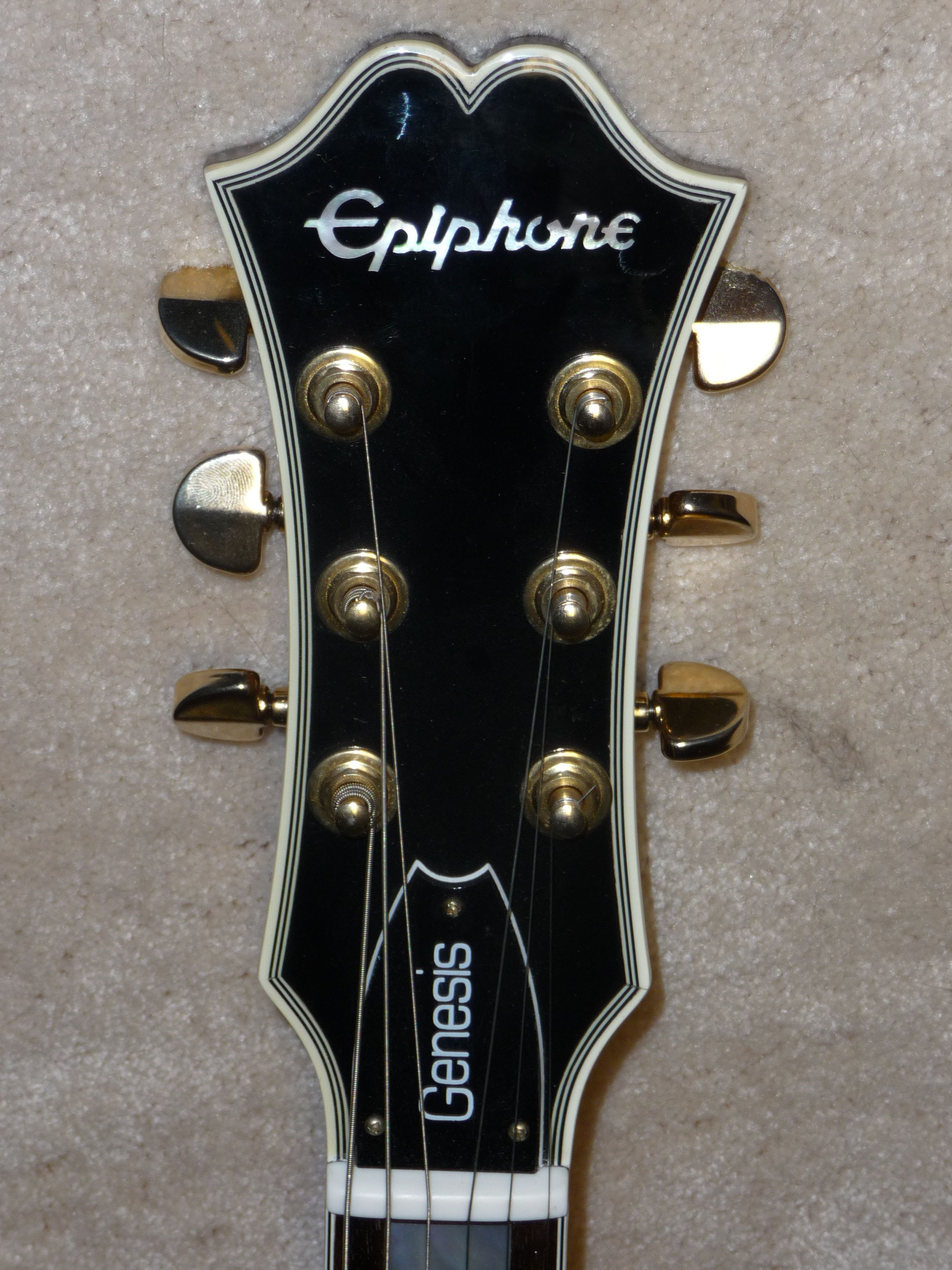 
The rosewood fretboard was dressed  with trapazoidal inlays

The Standard model and single ply binding on the guitars body. The neck and headstock were unbound. The rosewood fretboard featured dot inlays. Both the Standard and Deluxe models came with chromed nickel hardware.

The Epiphone Genesis Bass was only offered in Ebony. The bass featured two humbucking bass pickups with solid chrome covers; no pole pieces. The chrome bridge was at the bodies distal end. The mahogany neck was topped with a rosewood fretboard that featured dot inlays. The guitar had four chromed nickel tuning keys. There was a single volume and a single tone knob, a pickup selector switch and a mini switch for pickup coil tapping.

Most all models included open coil humbucking pickups on black bobbins (except the bass), although some seem to have been offered with pickup covers. The body style with its unusual twin cutaways made these instruments very distinctive. This guitar was designed by Gibson’s then director of marketing Jim Walker and they were built at the same Taiwanese factory that made Pearl Drums.

In 2012 Gibson decided to reissue the guitar, but only as a single model. It is still available today and sells for around $425 USD. That is a great price considering that in 1979 the Genesis Custom sold for $399.95 USD. 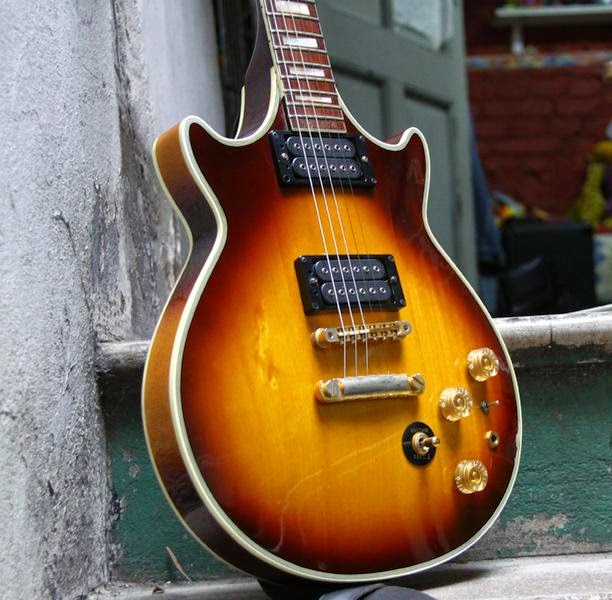 The older models came with twin humbucker pickups, two volume and one master tone control and a DPDT switch for coil tapping. The electronics on the new model are different.

The headstock on the new model is less pronounced. It features 3 on-a-side tuners.


The output jack and the pickup selector switch are mounted towards the distal end of the body. All the Epiphone models featured a tune-o-matic bridge and a stop tailpiece.

The modern Genesis guitar features 2 volume and 2 tone controls, the pickup selector switch in a similar location on the guitar’s body. The volume speed knobs have a puch-pull function that activates the pickups coil tapping feature. The pickups on this version are Gibson’s Probucker with Alnico II magnets. The pickup in the bridge position is over-wound to give it some bite.

The hardware on the new model is gold-plated. The body and neck have single ply binding. There is no binding on the headstock. 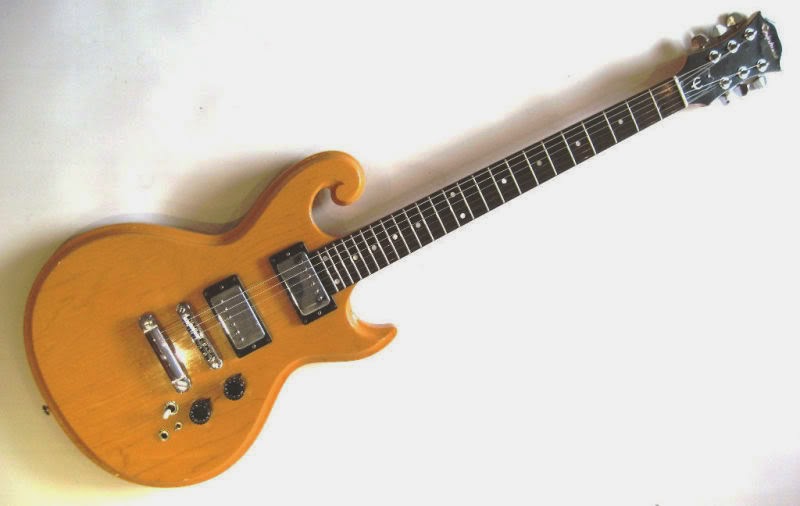 Possibly the most unusual guitar made under the Epiphone brand is the Epiphone SC Scroll. It was produced in Japan at the Matsumoku factory from 1976 through 1979 and is named for the carved scroll on the upper bout of the guitar.

The Scroll body also features a unique German Carve around the edges of each model. Other features of the Scroll model were ebony or ebonized necks, coil-tap and optional Leo Quann Badass-style bridge as well as optional open-coil Scroll pickups by Gibson.


The SC-350 featured a Mahogany body with the German carve surrounding the mahogany finished top. The bolt-on neck was bound with white trim. The fret board was made of rosewood and featured dot inlays. The guitar was equipped with twin humbucking pickups controlled by a single volume and tone control and a 3 way switch. The strings went over a tune-o-matic style bridge and attached to a stop tail piece. All hardware was finished in chrome. The nut was made of plastic. The three-on-a side tuning gears were covered die cast versions.

The SC-450 came with a Maple body that featured the German carve. It was offered with either a Mahogany or Natural finish. The neck was made of Maple and was set in to the body. It was topped with a rosewood fret board that came with dot inlays. It had twin humbucking pickups that were controlled by a single volume and tone control, a three-way selector switch and a split-coil switch. This guitar came with either a tune-o-matic style bridge or a Leo Quan Badass style bridge. The tune-o-matic versions featured a stop tailpiece. . All hardware was chrome finished and the nut was made of bone or plastic. The three-on-a-side tuners were sealed die cast models.

The SC-550 also featured the German carve on its Maple body. Like the 450 version, the neck on this guitar was set-in and made of Maple. The neck was topped with an Ebony fretboard with block inlays.


It featured twin humbucking pickups on the body controlled by a single volume and tone control, a three-way selector switch and a split-coil mini-toggle switch.

This guitar came with a tune-o-matic style bridge and a stop tailpiece. The nut was made of bone and all hardware was finished in gold plating. The three-on-a-side tuners were sealed die cast models. The body came in either and Ebony or Natural finish.

Posted by marcusohara@aol.com at 6:46 PM 2 comments: