The Summer Olympics are here and what better time to review some unique guitars bearing the name “Olympic.” From 1931 through 1950 Epiphone offered an archtop guitar called The Olympic model. This was originally produced by the Staphopoli brothers in their New York facility.


For the first few years this model was fairly small as it was a mere 13” wide, with segmented f holes. By 1933 the width increased 5/8’ths of an inch.

In this same year the peak headstock was replaced with a non-peak version. 1934 saw the addition of an Epiphone decal logo with the words Masterbuilt underneath the company’s name.

This same year saw the release of the Epiphone Olympic in tenor and plectrum versions. In 1939 a center dip was added to the end of the headstock.

No more changes took place until 1942 when the logo was updated to have a tail underneath “Epiphone.” The guitar was a page in history by 1950, when the company discontinued the model.


A different version of this same guitar was marketed in England from the mid 1930’s through 1937. Though produced or just marketed by Epiphone is somewhat of a mystery.

The guitar bore the logo, Apollo, but had an Epiphone Masterbuilt decal on the headstock. It’s body was wider than the Epiphone Olympic, 16” and it came with a standard black pickguard.

The body was made of either mahogany or birch. It may have been built by the Regal Musical Instrument Company for Epiphone distribution.

It was not until 1962 that Epiphone revived the Olympic name. This time it was on a series of electric guitars created during the Gibson CMI period.

The first version of the Epiphone Olympic electric was a thin solid body guitar with an asymmetrical double cutaway. It was Epiphone version of the Gibson Melody Maker. The instrument weighed in at under 6 pounds.

In 1965 the company made a radical change in design of the Olympic that became the basis for many Epiphone thin line solid body guitars.


The body bore a large white pickguard with a large Epiphone lower-case ε in the middle of the pickguard.

The tailpiece was a Gibson Maestro vibrola with a white plastic handle, sometimes called the Walrus tooth arm.

Many of the Olympic models came with one Melody Maker style single coil pickup placed in front of the bridge. There were separate volume and tone controls. The input was mounted on top of the pickguard.

The 24.75” neck was topped with a rosewood fretboard that was topped with 22 frets. The headstock was the Epiphone Bat wing style with six-in-a-row Kluson Deluxe tuners. All hardware was chrome plated.

The Olympic was also produced in a twin pickup model. This had the same type of pickups with an output of 7.16k and separate tone and volume controls for each pickup. All were mounted directly on the pickguard along with a 3-way Gibson style switch and the input.

This guitar came in a variety of colors. The 1965 Inverness Green model pictured here is very rare. 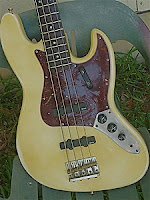 Although Fender never did have an Olympic model guitar, one of Fender’s more popular shades of paint is Olympic White. The finish did not hold up on older models. 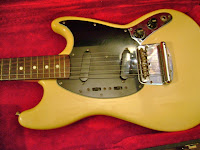 As you can see from the pictures, the paint takes on a yellow hue due to the lacquer used and aging. Personally, I like it.

Henley is a relatively unknown guitar distributor. Their products are made Korea. They offered a bass guitar with the name Olympic.

This bass has two pickups that are very different. In the rear the pickup is a Musicman style, while the front pickup is similar to what you would find on a Fender Jazz bass. This instrument has active controls mounted on its body. These include a pickup selector, volume control and a control for low EQ as well as one for high EQ. All hardware is made of die-cast nickel. The neck has a satin finish and the rosewood fretboard is topped with with offset pearloid position markers.

Henley Guitars are run by the husband and wife team from the UK Andy and Denise Henley. They import our own ranges of guitars and sell direct. Due to low overheads and they can offer excellent prices. Denise has a background in importing, shipping and freight. She runs all the administration side of the business and packing and shipping.

Tacoma Guitars were an acquisition of the Fender Musical Instrument Company. I do not know if Fender has completely closed out the brand or just placed Tacoma on hiatus. Historically, Tacoma was a small Washington state based guitar manufacturer that came out with a very fine and interesting line of guitars. One of their most popular models was an acoustic travel guitar known as the Tacoma Papoose.

After becoming well known, Tacoma launched a budget Korean import model and put the logo Olympia on these models. Though the price point factor was their goal, since Olympia models sold at a considerably lower price than Tacoma guitars. Non-the-less, Olympics were fine instruments. 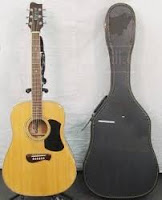 For instance, Olympia guitars model OD-18S came with a solid spruce top with a glossy finish, a 25.5” scale set neck made of mahogany, a rosewood fingerboard with 20 jumbo frets that had abalone position markers. The bridge was mad of rosewood and had a rather unique shape. The neck and body were bound. The rosette was made of abalone. The sides were made of solid rosewood, but the back was made of laminated rosewood.

Olympia guitars came in various models made of differing woods. They also offered mandolins and acoustic bass guitars. All Olympia instruments are designed and set up in the USA .

Finally, there is a manufacturer from Columbia, South Carolina called The Carolina Guitar Company. They offer a distortion pedal known as the Olympia Fuzz. The manufacturer stated they were inspired by the Bender fuzztone and the Big Muff Pi fuzz and named after the Hammer of the Gods. This little pedal has received great reviews.

David Rawlings with his 1935 Epiphone Olympic


Posted by marcusohara@aol.com at 8:23 PM

In the southern Spanish peninsula of Iberia is the autonomous community of Andalusia. The name traces back to the Arabic word, Al-Andalus. This part of Spain was settled by Muslims, Romani, Carthaginians, Greeks, Roman, Phoenicians, Iberians, Sephardic Jews and other diverse groups.

The art of lutherie or stringed instrument building has long been associated with Spain. The luthiers of Andalusia made instruments in a wide range of prices, largely based on the materials used, and the amount of decoration. The cheapest guitars were often simple, basic instruments made from the less expensive local woods such as cypress, rather than imported rosewood.

It was here that a style of playing known as Flamenco flourished. Flamenco is dance music. In addition to playing the strings, Flamenco guitar utilizes percussive tapping of the guitars body.


A friend once said, “Nothing really changes, everything remains the same.” In the beginning, most musicians were not getting rich, as is the case today. Most could only afford and inexpensive guitar. Which might be good for Flamenco music since the instruments have a very short life span due to all the tapping and slapping of the guitars body.

So less expensive woods were used on Flamenco guitars. The tops were generally made of cypress. Sycamore was used for the back and sides. On a really good instrument the maker used rosewood.

These were hard woods and produced an increase in volume and a brighter tone that could be heard over the dancers’ shoes that had nails in the soles. Flamenco guitars are lighter than Classical guitars. 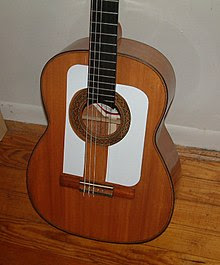 Some come with a type of celluloid pickguard known as a golpeador that protects the guitars body from the tapping and striking.

The following short film is about the making of a Flamenco guitar. It is called The Making of Alma Flamenca, which roughly translates to Soul of Flamenco.

The luthier is Vassilis Lazarides, who is a well respected Greek builder, in business since 1990. Mr. Lazarides started by constructing traditional instruments such as bouzoukis, oud, pontic and Istanbul liras and renaissance lutes.

In 1995 he began creating Flamenco and Classical guitars.

The film condenses into three minutes a job that took Lazarides 299 hours to complete. For those of you doing the math, if Lazarides spent 9 hours a day working on the guitar, it would have taken him a little over a month to complete, assuming he worked weekends.

I found the film fascinating, since you can see how the craftsman doesn’t just work with the wood, he listens to it, feels it and determines how much vibration will occur.


Posted by marcusohara@aol.com at 7:35 PM

A good friend sent information to me about this amazing little device. I am surprised no one has come up with this idea until now. This is a portable, easy-to-use guitar pick punch.


Ions ago, when I first started playing guitar, I was forever losing picks. I'd buy a half dozen at the music store and a week later friends would borrow them or they magically disappeared from my guitar case.

Let's face it, guitar picks are small, usually fairly inexpensive and easily misplaced. They may fly out of your hand when you are on stage playing or fall into the soundhole of your acoustic guitar.

The Guitar Pick Punch is about the size of a 6" desk stapler, so it can easily fit into your gig bag or guitar case. It accepts a variety of materials as long as they are no more than 0.9mm thick. If you need a heavier pick, you can make two and glue them together.

You just insert the material into the Guitar Pick Punch and squeeze out your style 351 pick in an instant.

It sells for approximately $25 USD 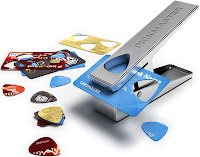 This is another brand called the Pickmaster Plectrum Punch. It sells for $39 USD and is available through Amazon.com