Gibson was purchased in 1944 by CMI, Chicago Musical Instrument Company. The E.C.L. Corporation seeking way to capitalize on the booming guitar market of that decade offered to go into business with CMI and they acquired the company in 1969.

By 1974 partners H. Norton Stevens head of E.C.L and William Berlin, who was head of CMI joined forces called the business Norlin or Gibson Norlin. Which combined the syllables of the partner's sir names.

I certainly do not mean to deride the reputation of either of these gentlemen. After all Mr. Berlin was CEO of the giant music conglomerate CMI and  H. Norton Stevens was a graduate of Harvard.

Mr. Stevens left Gibson due to a hostile take over, he was appointed to the Inter-America Foundation by President G. H. W. Bush.

Not much is written of the hostile takeover of Norlin in 1985 by the securities firm Rooney Pace. It is evident this firm knew nothing about running and marketing a music instrument manufacturing business. In fact they figured this out early on, since they sold the company one year later.

Rooney Pace had ongoing issues at the time needed to clean their own house. Three years after selling Gibson, Rooney Pace, it's president, Randolph Rooney and five executives were fined, censured and expelled from the N.A.S.D (Nasdaq) for stock manipulation. But I am going too far ahead in the Norlin story.

It was in the beginning of the Norlin era that Gibson left Kalamazoo Michigan and moved their headquarters to Nashville Tennessee. In doing so the company lost some of it's finest craftsmen.

It is my opinion that Gibson Norlin lost the sense of all the wonderful things they were doing right throughout the company's history. During this era there were a few great instruments made, but Gibson also produced some truly weird creations that were not worthy of the same company which built fabulous instruments designed by the likes of Lloyd Loar and Ted McCarty.

I am not certain who the designers were at that time, however it would appear the monkeys took over the shop for a few years, I offer these Bizzaro World creations as evidence. 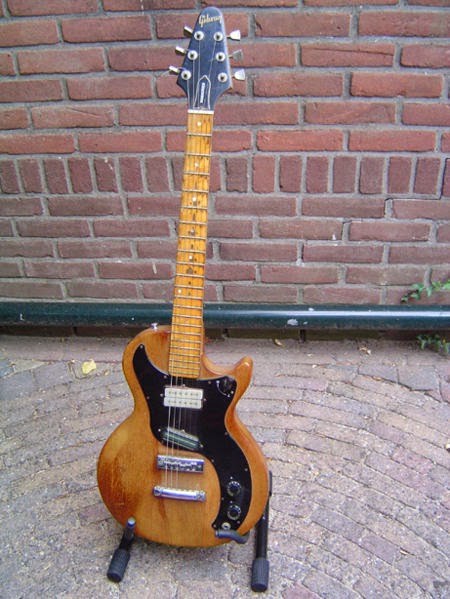 In 1975 Gibson introduced the Marauder. This guitar was intended to coincide and compliment the Gibson Grabber Bass guitar. The Marauder never really became well established on the market. The Gibson marauder was introduced in 1975 it was 12 3/4" wide, and had a les Paul shaped single cutaway, maple or mahogany body (some with alder bodies), a humbucking pick up in the neck position for rhythm and a single blade pickup in the bridge position at a slant for solo work.

A large pick guard which covers the entire upper body. The unbound neck was topped with a rosewood fingerboard , dot inlays and a triangular round-top spear-shaped headstock similar to the Gibson Flying Vee.

The guitar had a compliment of 2 knobs and a rotary tone selector switch which created an interesting tone frequencies from the 2 pickups.

In 1976 Gibson also introduced the Gibson Marauder Custom which featured a three way switch on the cutaway bout, bound fingerboard, block inlays on fingerboard, and were made in tobacco sunburst finishes.

In mid 1975 Gibson produced the Gibson S-1 guitar and released it for sale on the market the following year. The Gibson S-1 had very similar features like the Marauder , its 12 3/4" wide with a Les Paul shaped body , bolt on neck , maple or rosewood fingerboard, dot inlay, pointed round headstock similar to a Flying Vee, stop tailpiece, tune o matic bridge, large pick guard ( pointed at the treble bout ) and 3 single coil pickups.

The guitar actually sounded great considering its price. This guitar has an original sounding funky, bluesy, strat-type tone from its single coil pickups which can be altered by playing around with its 2 way toggle and its 4 position rotary switch . The 3 pickup schemes give the impression this was Gibson’s attempt to cash in on the Strat market. 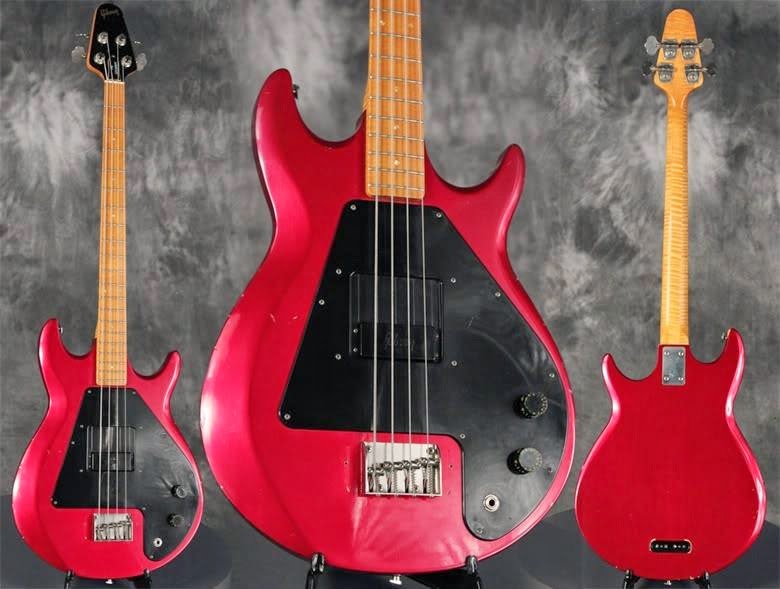 The original Gibson Grabber Bass, the G1, was introduced in late 1973. These Gibson bass guitars were built with a bolt on neck, 20 fret maple fingerboards, one movable pick up and a tune o matic bridge. The Grabber Bass featured a large body with a double-cut alder body, all topped with chrome hardware. Like the prior Norlin creations, this bass came with a Flying V style headstock. It was offered in various colors, however the most popular was a natural finish.


The Grabber Bass was a success. This was Gibson’s first bolt on neck bass.  The movable pickup was an interesting feature that left many bass players intrigued as by manually moving the pickup towards the bridge or neck one could create a deeper thick sound or a very punchy sound.

Much of the Grabber’s popularity stemmed from their use by Gene Simmons of Kiss.

Gibson realized that they had come up with a successful instrument and in 1975 capitalized on it by introducing the Gibson Grabber G3 Bass guitar.

The G3 was similar to the original Gibson Grabber except it came with 3 single coil pickups connected to a 3 position switch. It also sported an upgraded rosewood fingerboard and nickel plated hardware. The pick guards were all black.

The final evidence that Gibson Guitars lost their mind occurred in 1982 in the form of a guitar called the Gibson Corvus.

OK, Latin scholars, Corvus is the Latin word for:
a. A small car produced by Chevrolet that Ralph Nader was not fond of.
b. A tasty snack made of compressed corn.
c. A rather silly looking electric guitar.
d. Crow.

There may be those of you are old enough, you may remember the old fashion can opener that had a curved blade that cut into a cans lid. Now envision this shape with 6 strings, pickups, a neck and tuners. This is exactly what the Gibson Corvus resembled.

Gibson decided it was a great idea to produce 3 versions of this silly instrument.

The Corvus 1 had a solid body with an offset v-type cut, bolt on maple neck with a rosewood fingerboard, volume and tone controls, and one and one hum bucker pickup. The standard finish was silver gloss. However this beauty could be had in other finishes that include yellow and orange. The headstock was 6 on a side similar to the non-reverse Firebird model.

The guitar also sported a very unusual bridge design. They did not sell many of these. 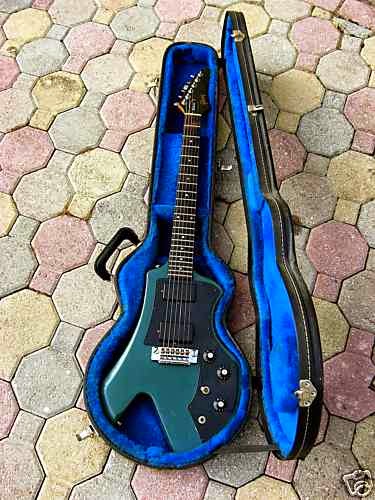 Gibson also introduced the Gibson Corvus II guitar, the guitar was the same as the Corvus I but with 2 hum buckers and two volume controls, one was a master volume control.

And if you can believe it the Gibson Corvus III electric guitar was the same as the Corvus I, but with three single coil pickups, a five way switch, one master volume and one tone control.

The one cool thing about these Norlin guitars was the pickups. They were designed by Bill Lawrence. 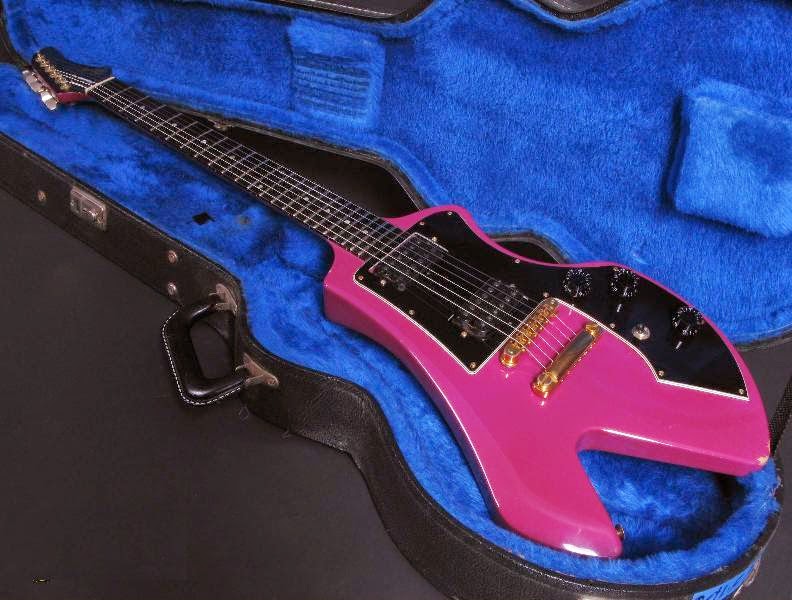 You would think Gibson would stop there, but no! They came out with the Futura. It was a Corvus II with a different name, but upscale. It had twin Gibson humbuckers with no covers and it was neck-through body construction.


Thankfully in the late 1980's the company was rescued by its present owners. Gibson Guitar is now a privately held corporation owned by chief executive officer Henry Juszkiewicz and president David H. Berryman. And once again Gibson has returned to it's roots and is making great instruments.

Posted by marcusohara@aol.com at 9:14 PM

These are my favorite Gibsons ever. I collect every axe on this page and find them to be much more useful guitars than any of the other guitars that Gibson has ever offered. Anything they did with bolt on necks and single coil pickups was a major improvement over what had been done or has been done since. Great guitars.

Hi, thanks for the enjoyable blog. The 'crazy" models and frankly, rather crappy low end models (the paul anyone?) aside..i am NUTS for my Deluxe.Its easily the most comfortable, best playing, best sounding Lespaul ive ever laid hands on. I also think its the best looking. Generally the finsihes werent so hot -plain and the laquer they used then seems to get very dirty and stay that way. They also get very smudgy and grubby with just a litle handling and the mid-70's Norlin Pee-Yellow effect is infamous...but the profiles were gorgeous and Les Paul tend to loom the same. Thats what most people want - a zombie 1959. On the the 69-76 Deluxe offers something different in the way of design (70's minimal) whule maintaining the cool traditional Les Paul profile. I have a 72 SG special, a 76 Les Paul Deluxeand a 72 J-45, and im after a 72 ES-325..mini humbuckers RULE!! The Norlin era guitars are my favorites.

eToro is the best forex trading platform for beginning and pro traders.

Follow our signals today and earn up to 270% per day.