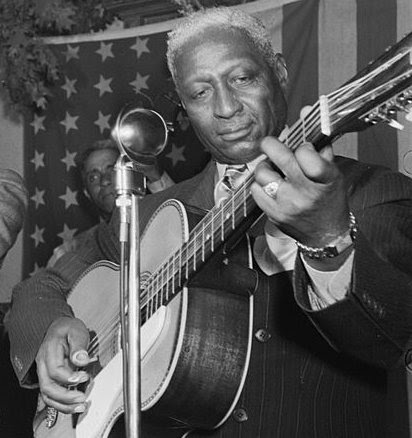 Huddie Ledbetter, better known as Leadbelly played a Stella 12 string. So did a lot of other Blues men. Most loved the big, big sound it got when they played slide guitar. Most of them tuned their Stella's down to accommodate the tension of the strings.


As I have mentioned before, Brit Rockers from back in the mid 1960’s and the Folkies from the 1950’s loved the songs and style of the old Black blues players and tried their best to emulate them. 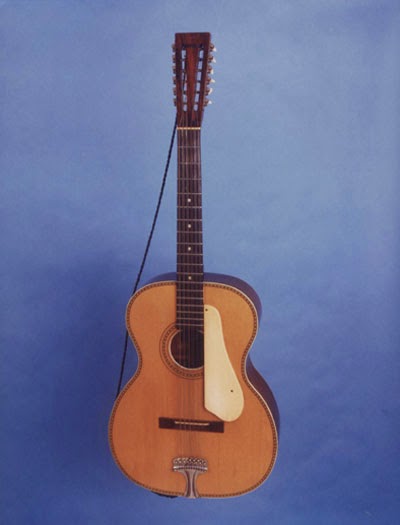 Often a guitarist would go as far as to seek out a similar instrument, thus the interest in the Stella guitars.

Oscar Schmidt did not start out as a guitar manufacture. He had emigrated to the U.S. from Saxony. He was a skilled bookbinder and he eventually started publishing books, some of which were music books.

In 1890 he began manufacturing musical instruments to go along with the music books he was publishing. It was during this era that Schmidt began using the Stella and Sovereign trade names for his guitars. In 1910 he opened a musical instrument factory in New Jersey to fulfill the demand from music stores and wholesalers. He was already supplying Sears and Roebuck with the better quality guitars they sold through their catalog.


Most of the Oscar Schmidt guitars sold through Sears featured spruce tops and rosewood or mahogany bodies.

One unique and consistent feature was the use of ladder bracing. Many of the older guitar manufacturers such as Harwood and Maccaferri used ladder bracing, while Martin and most Gibson guitars have “X” bracing.

The more upscale Schmidt guitars were trademarked as Sovereign. These guitars featured pearl inlay and marquetry trim. The bridge was a pyramid style that was similar to the ones on Martin guitars of that era.

Oscar Schmidt guitars also placed a position marker at the tenth fret rather than the ninth fret. This is true also of some older Harmony guitars.

Stella was the trademark name associated with the downscale product that Oscar Schmidt was producing. These instruments were made entirely of birch and had faux wood grain . Instead of marquetry these guitars used decals, which at the time were referred to as decal mania. 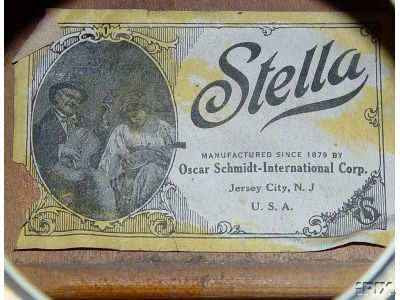 Early in the twentieth century, Oscar Schmidt was the largest manufacture of musical instruments in the world and encompassed factories in the US and Europe. How does the Stella 12 string guitar sound? It has a thin sound with a lot of high range.

This is primarily due to the use of birch. A second factor would be the ladder bracing. This is not the sound most of us would be seeking from an acoustic instrument in this day and age.

The scale was it was 26.5 inches from bridge saddle to the nut. This is longer than most steel string instrument, but similar to a classical guitar scale. 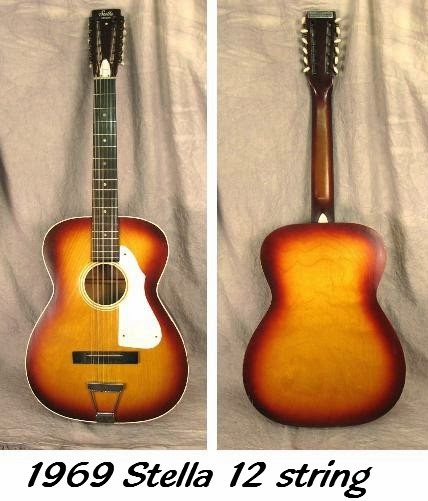 Due to the stock market crash of 1929 and subsequent Depression, Oscar Schmidt shut down. It was eventually purchased by the Harmony Company which revived both trademarked names and built very similar instrument.

Posted by marcusohara@aol.com at 2:08 PM

Interesting stuff here. A few comments regarding your information.
First, Martin and Gibson had X-bracing, not fan bracing. In fact, most attribute the 'invention' of X-bracing to C.F. Martin.
Leadbelly didn't choose a Stella 12-string because he was poor. His famous jumbo 12-string was actually special ordered and custom made for him in the 30's. Probably cost him a good bit of money at the time.
The sound of Stella 12-strings is not noteworthy in it's high register. Rather, it the raw power of the bass and mid range sounds that these 'baritone' guitars produce due to their size, long scale length, and the ladder bracing.
Hope this clarifies a few points..Regards, Tom

wow this guitar seems to be nice and beautiful on the description in amazon O read that you can even almost imitate a electric one.

thats a beautiful looking guitar. do you have any videos or recordings of it being played? great review/post keep up the hard work. check these out IStillGotMyGuitar

Thanks Thomas, Somedays, I wish I had an editor.

Start following our signals NOW & make up to 270% per day.