Guitars for girls, is this just a marketing ploy or a great idea?

Trish Ciravolo thinks so and is putting her name on the line with Daisy Rock guitars. She founded the company based on an idea her two year old daughter. 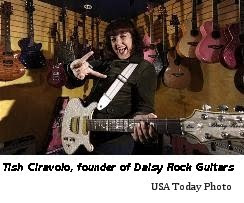 Trish had been a longtime guitarist and player in several L.A. scene all-girl bands. But in 2000 she was a stay at home Mom. Her daughter drew a picture of a daisy. Trish put a guitar neck on the picture and voila, an idea blossomed.


It probably helped that Trish’s husband was Michael Ciravolo, president of Schecter Guitars, which not only makes guitars under its own brand, but makes upgrade parts for guitars. He encouraged Trish on her concept and as of 2005 Daisy Rock has revenue of $2.4 million.

These guitars are designed for women and young girls. The bodies are lighter and contoured to make them more fitting for the female form. The neck scale is shorter than the usual 25.5” neck found on most Fender instrument, which means the space between frets is lessened, to help accommodate smaller hands.

The companies guitars weigh less compared to some other guitars.

And the finishes are designed to appeal to the ladies, come in shades of pinks, blues, purple, red and green. Some of the guitars are sparkly and come in heart, butterfly, star and flower shapes.

Your average male guitarist is not going to plunk down $3,000 to buy a guitar called Rock Candy Pink, which happens to be Daisy Rock’s top of the line instrument and is made in the U.S.A. Most of Daisy Rock’s guitars are moderatly priced since they are manufactured in Far Eastern countries. 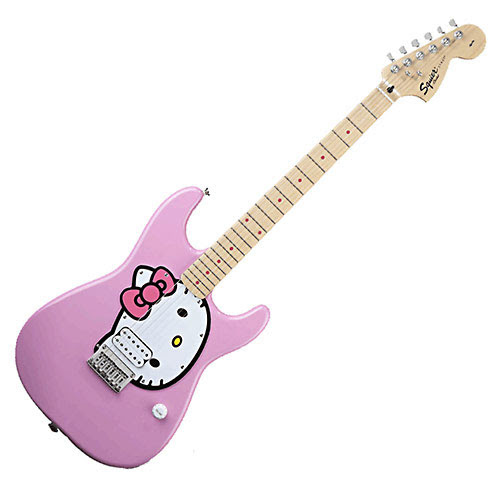 And though comments from Fender sales and marketing director, Andy Rossi seem to indicate Fenders opinion that the marketing angle limits distribution, Fender does not hesitate to market the Hello Kitty series of guitars and basses.

A few years ago Gibson had a guitar and bass that was aimed at the female teen Goth audience. It featured some unusual graphics depicting an internet character known as Emily the Strange.


Agile guitars which is an importer of Far Eastern made electric guitars, basses, some acoustic instrument and guitar related products makes some of their guitars with pink finishes. 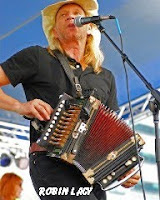 I might add there are some very manly men that I have met that are not averse to playing a pink guitar. Specifically I point to Robin Lacy that used to play a pink Fender Telecaster before he became a Cajun man and took up the ‘cordion.

My buddy from the Fender Guitar Forum, Pinetree, plays a wonderful pink Stratocaster with pickups custom wound by Abigail Ybarra of Fender. I might say that Pinetree is about 6’5” and 300 lbs and rides Harleys, so don't be dissing him about his pink guitar.

Michael Wilshire is a pastor in Roanoke Virginia. Recently he told me he used a Daisy Rock 12 string on a recent recording he made. He didn't mention if it was pink. It was definitely a more economical guitar than a Rickenbacker and I couldn't tell the difference.

It is my opinion that guitars designed for girls is definitely an excellent idea.

CNN Daisy - Rock Check it out!

Posted by marcusohara@aol.com at 11:03 AM

Discover how 1,000's of individuals like YOU are working for a LIVING by staying home and are living their wildest dreams right NOW.
GET FREE ACCESS INSTANLY

Get professional trading signals sent to your mobile phone every day.

Start following our signals NOW & make up to 270% per day.

Sometimes people don't believe me when I tell them about how much you can get by taking paid surveys online...

So I show them a video of myself getting paid $500 for participating in paid surveys to set the record straight once and for all.