The Rickenbacker Electro Spanish Model B may quite possibly be the first electric Spanish guitar to be produced for sale.

It was created and offered for sale in 1935 though not patented until the following year The designers were George Beauchamp, who designed Rickenbacker’s first steel guitar, dubbed The Frying Pan and Doc Kaufman, a man who later became associated with Leo Fender.

In fact Kaufman was instrumental in designing many of Fenders’ most popular guitars.

Adolph Rickenbacher was the idea man and financer. Rickenbacher was a Swiss born engineer and was in the tool and die business. One of his customers were the Dopyera brothers, who made National steel guitars.

It was Richenbacher that set up the press to produce the metal bodies for National guitars.

Through some twists and turns of fate Beauchamp, Kaufman and Richenbacher established a company called the Ro-Pat-In Corporation. Shortly after the name was changed to Electro Stringed Instruments.

In 1931 they set about building the first aluminum steel guitar known as  "The Frying Pan".

For those of you that remember history, this was only two years after The Great Depression. Sales of the Frying Pan were not going well. By 1935 the Electro Stringed Instrument Company aka Electro was offering it latest offering The Electro Spanish Model B.

The entire neck and body of this instrument are made of molded Bakelite. Bakelite is one of the earliest plastic materials produced. It was intended to be a replacement for shellac, but its durability and heat resistance made it useful for a variety of other products, from billiard balls to insulation casings for wire on electric and telephone poles.

Though this guitar appears to be solid, it is actually hollow. The neck is bolted on to the body and this may possibly be another first. The neck attaches to the body at the 14th fret.

Most of the guitars of this era took their queue from classical gut string guitars and the necks attached at the 12th fret. This was another unique factor. 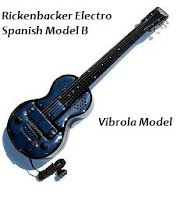 There are five decorative chrome-plated panels that cover the cavities in the instruments body. (Later models were painted or made of plastic.) The cavities are first designed to insure the molding was done properly and secondly aided in reducing the instrument's weight.

Even with the body cavities this guitar is still heavier than a similar wooden instrument despite being only about the size of a baritone ukulele. The 23 fret neck was also made of bakelite and was originally thought to be warp-proof. The designers decided it did not need a truss rod. However many of these guitars now have warped necks. 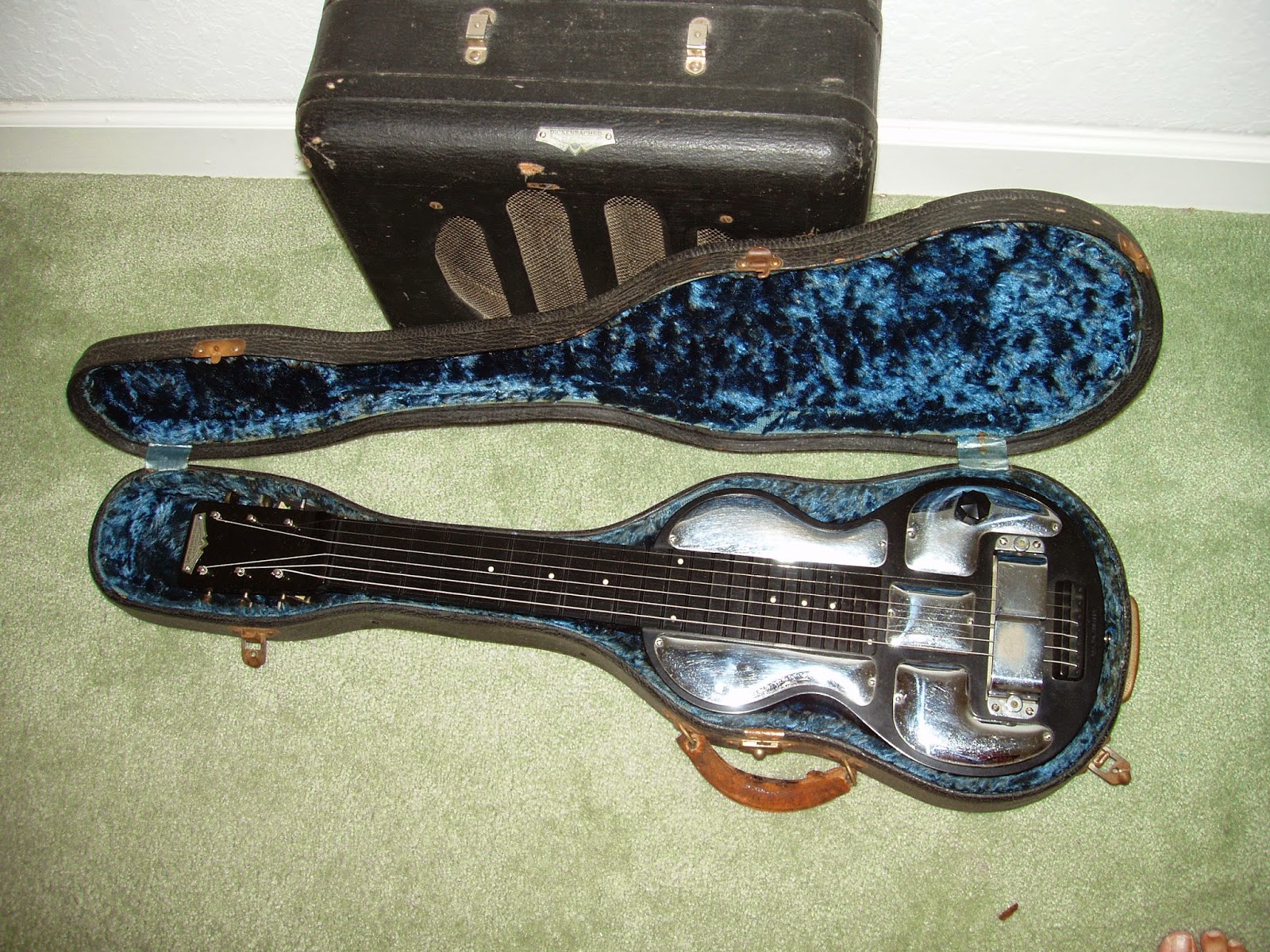 The horseshoe type pickup on the guitar was placed right before the bridge and covered with a chrome hand rest. A volume control (and on some model a tone control) were placed on the lower bout. Some guitars had it on the top lower bout and other placed it on the lower side. The chicken head knobs were also made of Bakelite

The company’s goal was to continue producing Hawaiian steel instruments, since this music was in vogue during the 1930's.

Producing a Spanish style guitar was a big step for Electro.

One issue to be considered was the fact that Bakelite is brittle and can easily crack. Therefore all screws had to be machine threaded or tapped into the body and the holes to attach the neck and wiring had to be hand drilled. The mounting screws and pickup screws were made of non-magnetic brass, to avoid interference.

Some of the guitars had the added feature of a Beauchamp designed Spanish guitar vibrato. This was not your usual Bigsby, Fender unit or Floyd Rose unit. It was an automated pitch shifting vibrato that was operated with pulleys, a motor and rheostats. To house all of this the body had to be made deeper.

I have seen a few without the covers and some of them were missing the pickup. What is strange is the interior cavities were stuffed with wadded-up old newspapers.

Most of the Rickenbacker Electro Model B guitars that have survived are the more popular ones that have the Hawaiian style neck and are played as a lap steel.
©UniqueGuitar Publications (text only)

Posted by marcusohara@aol.com at 3:21 PM

I don't know if you can help me but i've inherited an elctro model b, could anyone tell me what its appoximate value would be?

Many thanks if you can

I'll buy it from you

Ray Cruz: I have a BD-6 in excellent condition for sale with a tweed case. I also have the matching style 3 tweed Electro amp.