If D’Angelico guitars are the Stradivarius of the guitar world, Stromberg is the Guarneri.

Stromberg’s top model guitars, with huge nineteen-inch-wide bodies, provided the tremendous volume and projection needed for a rhythm guitarist to be heard in the large jazz orchestras of the 1940s.

Charles Stromberg and his son, Elmer worked together in Boston, beginning in the early 1930s. Charles, a Swedish immigrant, started the business in 1906 making banjos and drums. He was also nationally known for harp repair and engraving.

Charle's oldest son, Harry worked in the shop for a few years, but moved on to a different career. Elmer joined the shop and the changes he made provided a 15 year golden era for the business.

The top of the line Stromberg tenor banjos he produced were very fancy instruments and are valuable and sought after by collectors. When son Elmer joined the business the Strombergs concentrated mainly on guitars. After all, the tenor banjo had been replaced by the archtop acoustic guitar as an orchestral instrument.


The Stromberg's top of the line guitar was the Master 400 featuring stylish engraving on the headstock veneer. The body was 19" across the lower bout. In fact their guitars were either 18" or 19" and designed to compete with horns and brass in the big bands of that era.


Currently "Ranger" Doug Green from Riders in the Sky and The Time Jumpers plays and collects Strombergs. In fact he is THE authority on Strombergs. Little known fact is Doug worked at Gruhn's Guitars in Nashville many years ago. 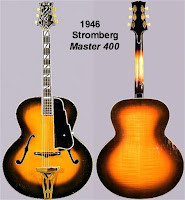 The Stromberg Master 400 is considered to be the ultimate orchestral rhythm guitar beating out Gibson's top of the archtop line 400 model. It is said these instrument are not as sweet sounding as D'Angelicos, but have better projection. In the days when electronic amplification was not the norm, a loud acoustic was necessary.

The Stromberg's produced only 636 guitars, which accounts for their value due to scarcity.

The models they offered were a limited selection. The G-1, G-2 and G-3 were 17 3/8th" across the lower bout with the G-2 and G-3 being fancier with an upgraded tailpiece. The G-3 had a cutaway

The Deluxe model came with or without a cutaway was also 17 3/8th" across the lower bout.

The Master 300 had a 19" span acrosss the lower bout and a stair step bound pickguard and block inlaid position markers. 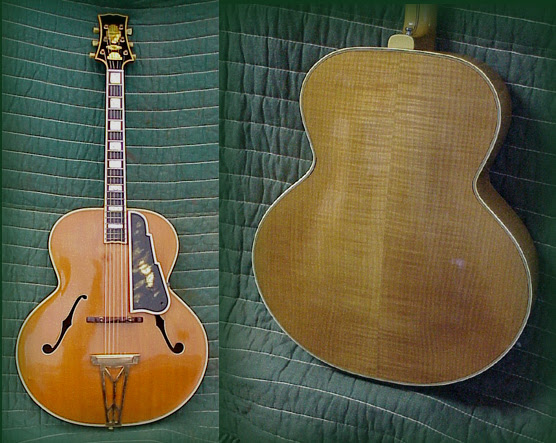 The Master 400 was by far the fanciest model, with stair step bound pickguard and a gold plated tailpiece with 5 cutouts. The headstock veneer was engraved, bound and bedecked with gold plated tuners and the position markers were slashed block style. 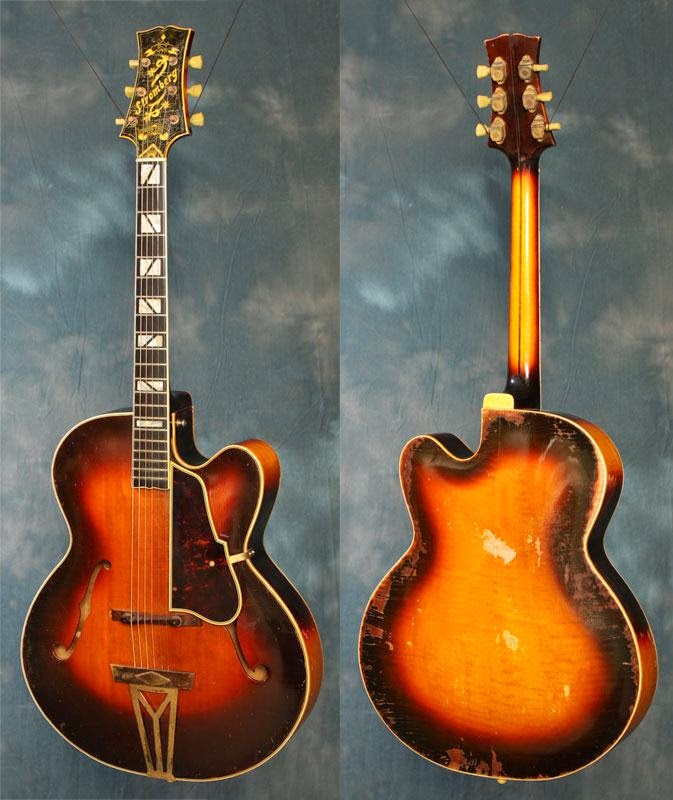 
The Strombergs did not keep records, so it is difficult to determine the provenance of each instrument. During the era when these were new instruments, word of mouth was the way that jazz players found out about new Stromberg models, or where a used one could be found for sale. 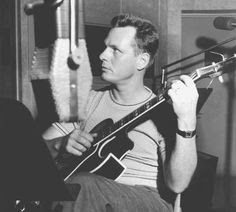 Jazz player Barry Galbraith once told his friend Hank Garland about a new short scale model that he had just acquired. Garland set out to have one of these built for himself. Garland was one of many jazz guitarists that preferred a short scale neck to aid in quick chord changes and cut down on string tension.

The earlier Stromberg's featured laminated pressed tops. And even so, they are still in demand by collectors although the tonal quality is inferior to the latter instruments with carved tops. Most other manufacturers at the time used an X bracing system on their archtops.

The Strombergs came up with a guitar that had just one diagonal brace across the top. This resulted in a more percussive sound just right for comping for rhythm in swing bands.

The latter Strombergs had adjustable truss rods in the neck that could be accessed by removing the bone nut.

Although the tops of Stromberg guitars made from the 1940's and on are carved and solid, the back and sides on some are laminated.


Their are some cosmetic flaws in Strombergs which may have earned them only 3 stars in a Guitar Player review (if it had been around), but these guitars were designed as working instruments.

Although both men worked on guitars, Elmer is credited with most of the guitar work and changes in design and production. As with the D'Angelico New Yorker, the Master 400 takes it's queue from the Gibson Super 400.

Interestingly, some of the wood the Strombergs used was scavenged from old Boston buildings that were being demolished.

One of the drawbacks of Stromberg guitars that had headstock veneer is the veneer was made of nitrocellulous and is subject to deterioration.


Charles and Elmer both died in 1955 within months of each other. Elmer was in an automobile crash. This ended Stromberg Guitars.

There is a Florida based company that has acquired the trademark to the Stromberg brand name. The new guitars, I understand have received excellent reviews, are Asian manufactured and other than the name are not related to any instruments The Stromberg Family produced.

Hi. I have been in the string ninstrument business for nearly 50 years and have only encountered one Stromberg guitar. It belonged to a friend of mine in the Dayton Ohio area (my busines, The String Clinic, was in nearby Farmersville, Ohio). He had acquired the guitar from a friend some years before I met him (about 1976). It was a Master 400, S/N 500 and completely worn out from about 40 years of profesional use. But it was still a "Hoss"! I recall he said it was a 1938 model; I can assure you that the sides and top were solid maple and spruce. I only have one color photo of it taken after my restoration. It was when the owner, Gene Monbeck, took it with him on a trip to Jimmie D'Aquisto's shop on Long Island to help a friend order a Custom D'Aquisto New Yorker. The cherished photo shows Gene with Jimmie holding the Stromberg. Sad to say, Gene passed away not long after and the guitar was sold to a collector. All of which means very little to anyone else. Gene, one of the best rhythm guitarist I have ever encountered (he was part of the 40s-50s Whipoorwills). He told me once, "I am the first instrument you hear when you come into the concert hall; I am the last one you hear when you leave." A fitting tribute to the mighty Master 400.

I forgot to tell you:
clydet@bresnan.net is my email
Floyd E. Turner

wow excellent guitars, have a electric yamaha I don't know the model butI want to change it because is kind of old.
Thanks

We're going to have to quit meeting like this!
I just had a chat with an old friend who is- and has been for years- writing a comprehensive book about Stromberg guitars. He invites comment, details, and discussion from any interested party. Find him at:James D Speros [jim.speros@gmail.com].
Floyd Turner

What a great site. I have a master 400 for sale with single brace if anyones interested. gbeaudoin@rcn.com I have owned a few through the years including the last one he made. A cutaway G-3. Bought one of Ranger Dougs for J.Geils. They are the greatest rhythm guitars. Love the video.
Gerry Beaudoin

Using RentalCars you can find the best car hires from over 49,000 locations globally.

The Stromburg top pictured in this blog is now here: http://dutcharchtopguitarmuseum.nl/stromberg-top/

Floyd! How are you. You fixed a Gibson ES 175 for me 30 years ago. I hope you are still going strong!