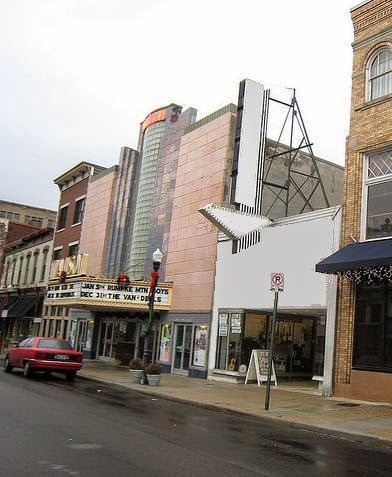 I was 12 years old and taking guitar lessons at Dodd’s Music Store in Covington Kentucky. The business was formerly a jewelry store, and accepted musical instruments for pawn. During the days of the British Invasion they found out there was more of a demand for guitars than Bulova watches. 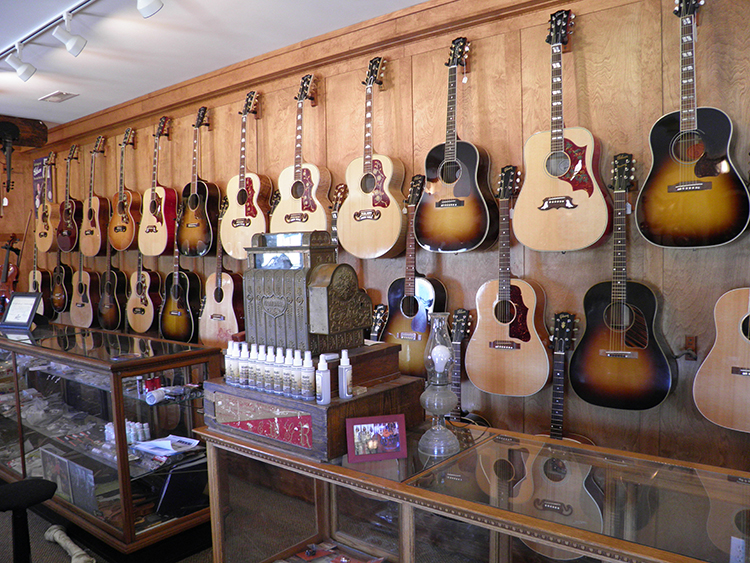 While waiting for my Thursday lesson I would see all these guys come in to check out guitars that were the best known players in the Cincinnati area.

Dodds would stock all the latest instruments from all guitar, keyboard and drum manufacturers. At the time I owned a ’57 Stratocaster that looked just like Clapton’s Blackie. Mine was known as the one that got away. But that is another story. 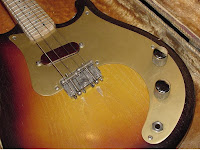 On the wall was this tiny Fender instrument that always caught my eye. It would have been a nice match for my strat, but I never had the funds. It  was a 1958 model Fender Mandocaster, Fender’s version of an electric mandolin. 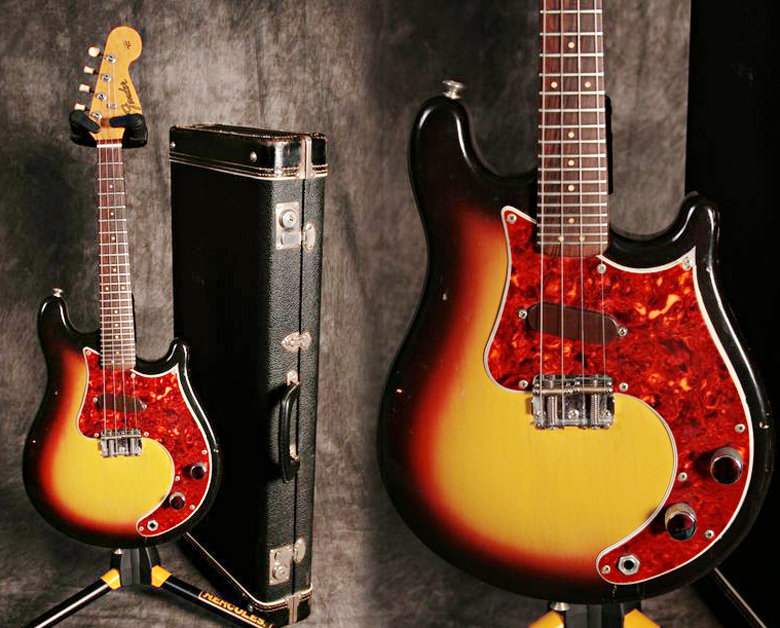 The Mandocaster bore some resemblance to a Stratocaster, however it was short, squat and only had four strings. The solid,ash body was slab style. The one at Dodd’s Music was sunburst.

This instrument had one slanted pickup with a black or reddish cover. It appeared to be similar to the pickup found on the Musicmaster or Duo-Sonic, but much smaller, with no exposed pole pieces.

The tiny maple neck had a maple fretboard and a tiny strat-style headstock that had four tuning keys with white plastic knobs. The headstock simply said Fender. There were only four peg heads since this Mandocaster only came with four strings.

The original Mandocasters had all maple necks until 1959 when they switched to rosewood fret boards.

In 1958 the body design was changed to the Fender contour style.

The other change that occurred in 1959 was the use of celluloid pickguards. Prior to that the Mandocaster had an anodized gold pickguard. The earliest sunburst models were two color and around ’58 they switched to three color sunburst.

The Mandocaster was also available in a natural blond finish. It wasn't until the late 1960’s when they were offered in custom colours.

I've learned a little about Bigsby guitars and the fact that Fender obviously copied some features from Paul Bigsby's creations. Bigsby had designed a 5 string mandolin for Tiny Moore, the mandolin and guitarist from Bob Wills and the Texas Playboys.


I have to wonder if this instrument was Leo Fenders way to offer a cheaper and mass produced version of the electric mandolin.

The bridge was mounted on a chrome plate and the two saddles were much like those found on a Telecaster. Each saddle supported two strings. The instrument came with a chrome bridge cover that was similar to the one that used to come with a Stratocaster.

In 1965 Fender made a few changes. They updated the pickguard to a 3 layer tortoise shell style and adapted the Fender spaghetti style logo decal.

The Fender Mandocaster were manufactured through 1976, which surprises me. The instrument was never popular. It sounded more like a guitar than a mandolin. Pro-mandolin players wanted that tinkly sound produced from eight strings tuned in unison. You couldn’t get that from this electric mando. Other companies were producing eight string electric mandolins, but what the public wanted was acoustic mandolins. And Gibson had cornered the market there.

These old Fender Mandocasters sounded more like a guitar than a mandolin, but they sure look nice.

Posted by marcusohara@aol.com at 1:32 PM

I found your blog because I wondered whether anyone out there remembered Dodd's. Jules pretty much outfitted our band, the Cordells, back in the sixties. I played a Gibson 330 through a Fender Super Reverb, which was not a great combination for the music we were playing. But at age 15 and before Guitar Player magazine and the like, what did I know?

Anyway, it's good to find someone who was around in those days.

Start following our trades NOW and gain up to 270% per day.