Johnny Antonopoulos aka Johnny A is like a lot of us guitarists, only better. Much better. In 1964 the Beatles hit the scene and guitar mania hit the world. Johnny A was only 12 and like many of us he became enamored with the guitar.

He formed a band in the Boston Massachusetts area and became well known. He improved and evolved into playing guitar for 7 years with The J. Geils front man, Peter Wolf. It was during this time he got into record production.

Although he played Strats early on, he migrated to Gibson guitars and developed a working relationship with Gibson's Custom Shop.

Johnny developed a style that is said to blend Pat Martino and Joe Satriani together. He makes great use of the Bigsby much like Chet Atkins. Using it to put a little vibrato at the end of a phrase. Unlike a lot of shredders, Johnny's style is restrained and lyrical. 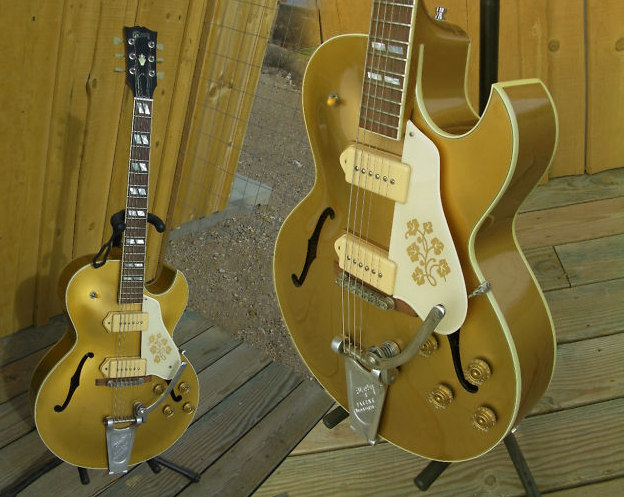 Prior to the Gibson Custom Shop building Johnny A's guitar, he had been playing a Gibson ES-295. The body on the 295 is similar to a Gibson ES-175, but is painted gold. It came with twin P-90 pickups and generally had a Bigsby vibrato tailpiece. 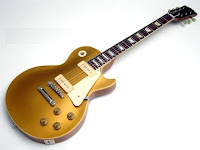 During his tenure with J. Geils and Peter Wolf, he was able to test out some wonderful Gibson instruments, particularly a reissue Gold top Les Paul and Flame top Les Paul. .


Gibson debuted The Johnny A model in 2003. The impetus for this instrument was born in a 2002 conversation he had with Gibson representatives at the Nashville NAMM show.

It has a smaller than normal body than one would find on a ES-335, but with similar accouterments, such as dual humbuckers with separate controls, a Bigsby Vibrato and top of the line gold plated hardware.

The ebony fretboard has beautiful inlays for position markers. It has a 25.5" scale. This was similar to the Gibson L-5 hollowbody.

The headstock is top of the line with a triple crown inlay. The bodies top, bottom and the neck are bound in white trim. The most stunning aspect of the guitar is the double Florentine cutaways and cats eye sound holes on either side of the guitars beautiful flame maple top.

Check out the string break from the bridge to the Bigsby

The bridge pickup is placed closer to the neck than on a Les Paul. This helps the guitar to get a sweet Jazz sound, but fattened up with the bite of the treble pickup.


The pickup selector is placed by the bridge for quick changes. The guitar comes with a sweeping pickguard that sets it off. In short it is a work of art.

Johnny has three of these instruments. One in a beautiful vintage quilted maple red burst finish, one in a lighter finish and the other in a transparent glossy black finish.

I can't help but recall seeing this guitar before in years gone by. After scanning a lot of resources I finally came across a Kay model from the mid 1960's. 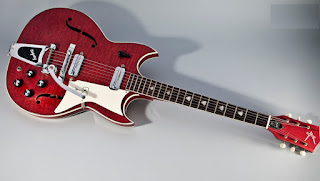 The model was the Kay Red Devil, K592. This guitar was available only in red circa 1963.

It came with two single coil pickups and a Kay version of a Bigsby vibrato. It was also sold under the Truetone brand by Western Auto Stores and under the Silivertone brand.

LIke the Johnny A model, the Kay K592 had two Florentine cutaways.


It's like they say, "Everything old is new again."

Posted by marcusohara@aol.com at 11:34 PM

very cool guitars, I don't recall seeing these before, great read as usual.

cool looking guitar, i never knew it before. thanx for the info :D

great blog! i'll be checking in, that's for sure!

there's another version called the Johnny A Custom Standard. it has chrome hardware and is all mahogany, no maple top. Available in two colours, an orangey stain and a vintage sunburst.

The sound is a little different due to the all mahogany construction and it was quite bit cheaper new.

Not sure if that Silvertone reference is correct. The 1407L looks more like a Fender Tele.

Way to go Anonymous! Or should I say Holmes. Since I posted this 5 years ago, I don't know where I got that reference. Jump to August of 2015 and my article about Crucianelli guitars. I have deleted the photo, but the one that was on there was a Crucianelli model, not a Silvertone. The guitar I was think of was a Kay Red Devil K592. I can recall seeing these in catalogs and at a local Western Auto store back in 1964. They were sold there under the Trutone brand name. Thank you.

Get professional trading signals sent to your mobile phone every day.

Start following our signals NOW and gain up to 270% a day.