It is a well known fact that some of the finest archtop guitars ever built in the 20th Century came out of a small guitar shop on Kenmare Street in New York City. These were the guitars built by John D’Angelico.

If you run across a copy of Acquired by the Angels by Paul William Schmidt, do yourself a favor and buy it. It is a fascinating read complete with pictures of many of D’Angelico’s instruments. 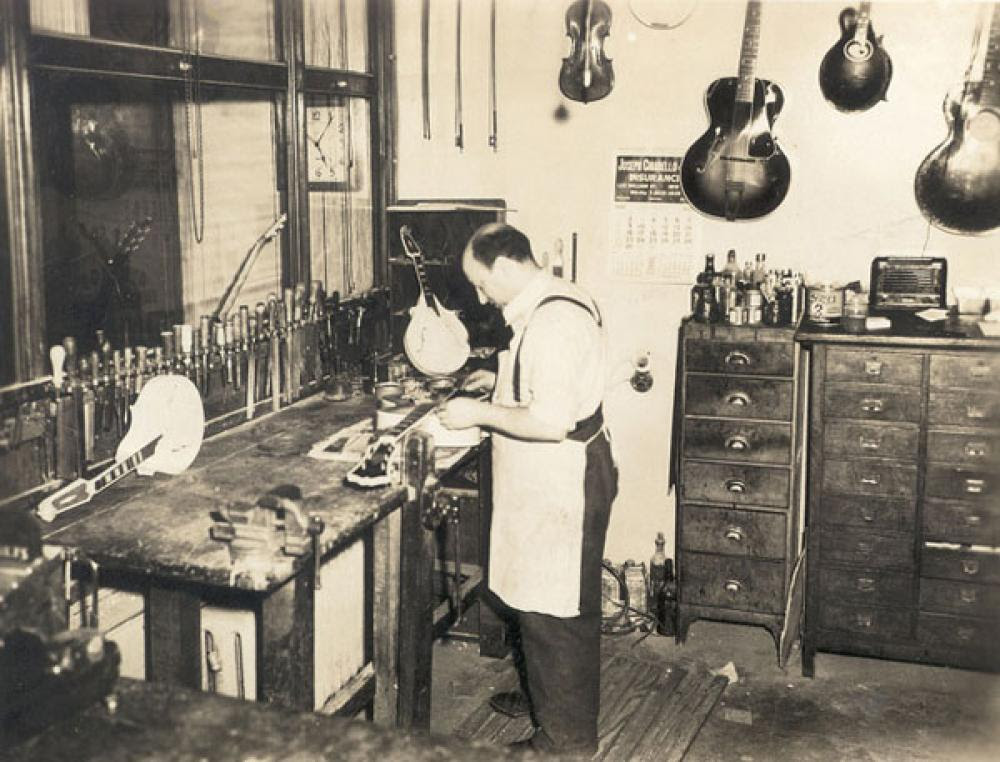 John D’Angelico was born to an Italian-American family in 1905. At only 9 years of age he was apprenticed to his great-uncle, Raphael Ciani, who made mostly violins and mandolins. Signor Ciani also made some flat top guitars. Young John eventually came to supervise Ciani’s shop.

When Signor Ciani died in 1932, D’Angelico became his successor. This is when he began making instruments of his own designs. Within five years, D’Angelico concentrated mainly on building guitars of his own design; guitars that were based the violins design techniques that he had learned throughout the years. These marvelous guitars had a carved arched top and back and f-shaped sound holes. 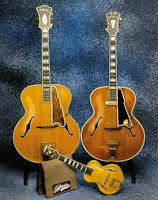 Though his production was robust in the 1930’s,  his shop was only producing around 35 instruments each year. And this included guitars and mandolins. Much of his day to day work involved repairs of guitars, mandolins and violins.

By the latter part of the 1930's John D'Angelico had settled on building only four styles of guitars. They were all based on the popular Gibson L-5. These guitars included the Style A, which much like the Gibson L-5 had a 17 inch body and his first original style head stock.

The Style B which also had a 17 inch body, although some examples measure it as 16 3/8th's inches. This model was the first to have a finial grace the unique head stock shape that became a symbol of a D'Angelico guitar.. Some early examples also came with the stair step tailpiece that came to be another trademark of D'Angelico guitars.


The Style B was phased out in the 1940’s and replaced by the Excel, which also had a 17 inch body. Although there were some Excel guitars produced as early as 1934. This was perhaps his most popular model.

D’Angelico made the decision to produce a larger instrument and called it the New Yorker. Perhaps this was in response to the Strombergs building a similar sized guitar. The New Yorker guitar had an 18 inch body. Only around 300 New Yorkers were built. They were all gorgeous instruments. These bore the other D'Angelico touches, such as the Empire State Building truss rod cover and his uniquely shaped pickguards.

The early D’Angelico instruments came with a steel rod to reinforce the neck, however it was not adjustable. This feature would come on instruments produced in the late 1940’s.

By the late 1940's D’Angelico had settled on only building the Excel and the New Yorker guitars. All of these are lovely instruments that feature exquisite pearl inlays on the head stock and the bound fret boards as well as quadruple binding around the body. Each D'Angelico guitar was built by hand and took several months to build. D'Angelico was topping the headstocks with decorative finials as far back as 1936.


His records show that he only produced a total of 1164 instruments, which included a few round hole guitars and some mandolins.

He also built an unusual tear-dropped shape guitar at the request of Peter Giraldi, who played in a group called The Teardrops. In 1957 he asked D'Angelico to make a unique instrument, "something different, that would stand out." What resulted was the D'Angelico Teardrop guitar.

This unique instrument has all the features of an Excel, but with a prominent fin on the lower bottom bout. John D'Angelico sold this guitar to Giraldi for $500.


In 1993 wealthy guitar collector Scott Chinery acquired the D'Angelico Teardrop guitar from the Mandolin Brothers music store paying $150,000.  He then challenged Jimmy D'Aquisto to build a similar guitar. D'Aquisto's version had all the features of his Solo model, along with the fin.


In 2007 luthier extraordinaire John Monteleone begqn his version and even added extra flairs, but making a scroll design on the upper bout that is similar to the design on a Gibson F-5 mandolin. Monteleone included 4 unusual sound holes on the instruments top and an additional one on the guitars upper side. This sound port could be opened or closed. Its purpose was to allow the player to better hear the guitar. The Monteleone instrument was 18 inches across to lower bout, which was a full inch larger than the versions that D'Angelico or D'Aquisto produced.

D’Angelico guitars contain a serial number inside the bass f-hole and range from 1001 to 2164.

John D’Angelico became very ill in 1959 and suffered a series of heart attacks in subsequent years. During a particularly cold winter of 1964 D’Angelico contracted pneumonia, but like most self-employed entrepreneurs he continued to work.

His apprentice, Jimmy D’Aquisto came to work one morning and found D’Angelico dead from pneumonia and a heart attack.

At the time John D’Angelico was only 59 years old.

His former employees went on to be in-demand craftsmen. Jimmy D’Aquisto was successor to D’Angelico. He started working for Mr. D’Angelico in 1952 when Jimmy was just a kid of 17. He began by sweeping floors and running errands earning $35 a week.

In 1959 D’Aquisto purchased the shop and designs from his mentor’s family. But in acquiring D’Angelico’s premises and guitar designs, D’Aquisto never actually owned the brand name, which remained in the hands of a lawyer who had provided loans to keep the business going. James D’Aquisto, quickly built a find reputation for his own name.


D’Aquisto went on for a few years building guitars in the style of his D’Angelico. He continued for the rest of his life to produce archtop guitars, but in his own design. Sadly D’Aquisto died unexpectedly in 1995 at age 59.

Both D’Angelico and D’Aquisto are still regarded as the greatest builders of archtop guitars ever.

Vincent Jimmy DiSerio worked for D’Angelico from 1932 to 1959 before going into business for himself. In 1965 he modified a Gibson ES-150 for guitarist Ralph Patt. Patt requested a wider neck to accommodate 8 strings. Patt developed an unusual tuning that went from low E to high E in major thirds tuning for the lower 7 strings. The highest string was tuned to high A♭.


Jimmy D'Aquisto went on and was very much in demand as a guitar builder and luthier until his death in 1995.

One guitar that D’Aquisto had created during his last years was Called the Blue Centura Deluxe. It was built for wealthy guitar collector Scott Chinery, who had an appreciation of fine instruments, especially those built by D’Angelico and D’Aquisto.

To pay tribute to Jimmy D’Aquisto and the Blue Centura, Chinery commissioned well known luthiers to build The Blue Guitar Collection. The event culminated with a huge party that featured a variety of guitars, including Scotty Moore, Tal Farlow, Johnny Winter, Jack Wilkins, G.E. Smith, Jimmy Vivino, Steve Howe, Lou Pallo and others, who all played the Blue guitars that were designed by the likes of Bob Benedetto and 21 other prominent luthiers. 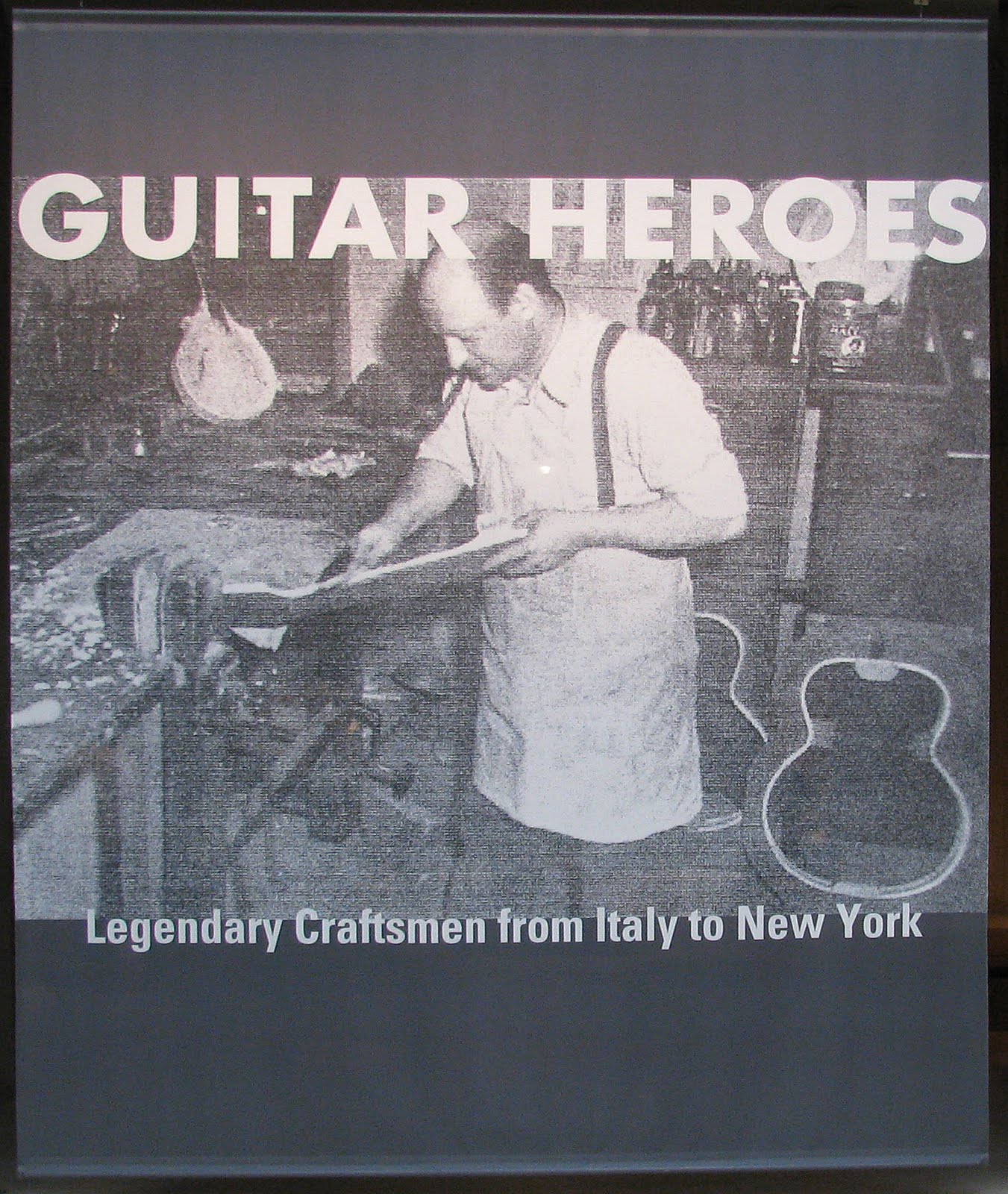 In 2011, works by D'Angelico and D'Aquisto were included in the 'Guitar Heroes' exhibition at the Metropolitan Museum of Art in New York City.

The exhibit titled Guitar Heroes; Legendary Craftsmen, From Italy to New York, fueled a renewed interest in the D’Angelico brand.

This event caught the attention and lead investors John Ferolito, Jr., Brenden Cohen, and Steve Pisani to purchase and resurrect the D’Angelico brand name, and build a new showroom in New York City.


Most of the modern D’Angelico guitars are crafted in Korea, but there is a limited run of USA Masterbuilt D’Angelico reissues being made by Gene Baker at the Premier Builder’s Guild workshop in California. The Korean versions are selling in the range of $1000 to the $1500 range. However the Masterbuilt series sell in the $11,000 to $12,000 range.

The company stresses that the Korean models are built with careful oversight from the USA and “strict adherence to many elements of John D’Angelico’s original designs. One of the Korean produced models was featured in the Grateful Dead’s final series of concerts and was autographed by the surviving memebers.


Posted by marcusohara@aol.com at 7:05 PM

Thanks for this. I'll always love reading about the magic guitar makers, D'Angelico in particular. In the very early '70s I did finishing for Stewart Mossman and Bozo Podunavac, and I still have dreams about the feel and the smell of those shops. Since that time I've had a longtime friendship with Ervin Somogyi, another genius.

It's worth noting, I think, that all archtops are/were inspired by Lloyd Loar's original L-5 from 1924 - carved front and back plates, f-holes, tailpiece, etc. All of John D'Angelico's early 16-inch guitars, as well as the early 16-inch Epiphones, were dead copies of the L-5 (although the Epis were always a half-inch wider.) When Gibsons got bigger with the 17-inch "advanced" models, so did everybody else, and the 18-inch Super 400 inspired the Emperor, the New Yorker, the Stromberg Master 400, etc.

Definitely Lloyd Loar's L-5 was the initial basis for most of the archtop guitars that followed. And I agree with you about the Super 400 and all the others you mention that were based on that guitar. These were guitars created in the Big Band Era, when the guitarist wanted his instrument to project over the horns and drums. I'm told probably the loudest archtops were made by the Strombergs.

Thanks for stopping by Rob. Don't be a stranger.
~Marc~

If you want your ex-girlfriend or ex-boyfriend to come crawling back to you on their knees (even if they're dating somebody else now) you must watch this video
right away...

The information you shared was useful. You have brought up a very wonderful points , regards for the post.
canon printer support | brother printer support