On September 30,1952—63 years ago—inventor and guitarist Harry DeArmond applied for a patent on a movable pickup that could be attached to acoustic guitars, especially archtops. The pickup, which became incredibly popular, did not require wholesale gouging or cutting of the guitar top, but rather was affixed to pickguards and bridges.

John Henry De Armond was a budding guitar player who began playing guitar, at age 10. As with many of us, he wanted to get a louder and more robust tone. As a tinkerer he fashioned a guitar pickup from the coil off of an old Ford Model A. This was in 1935.


John’s older brother Harold, born in 1906, who also played banjo and guitar, seized upon the design and looked for ways to profit from it.  Harry DeArmond believed that offering an add-on pickup that would avoid cutting a hole in the top of a guitar, and also give depression-era players a way to go electric without buying a whole new instrument, was the way to go.

He had originally developed the attachable guitar pickup as far back as the mid-1930's. But it would be much later before he became commercially successful. Later on in life he established a relationship with Horace "Bud" Rowe and the two men opened up shop in Toledo, Ohio.


They began with four models of guitar pickups. Two were for flattop guitars, which included the RH, and the RHC. These were similar pickups, but the RHC came with a volume control on a roller potentiometer.


The RH pickups fit into the guitar's sound hole and was retained with adjustable springs to minimize damage to the instrument and facilitate removal. Such notable British Invasion acts, such as Peter and Gordon used these on acoustic guitars.


The other two were designed for archtop guitars and were called the FH-B, and FHC. The latter had a volume control..

The FH type comprised a coil assembly that fit in a plain chrome-plated brass cover, and later on into a two slotted cover that was fixed to a 1/8" rod parallel to the guitars sixth (low "E") string. DeArmond called the rod a pressure rod. Some guitar players referred to this assemble as a "monkey on a stick" after a popular toy.

The rod passed through a small hole on the left side of the pickup. The rod is strategically bent to go around the bridge saddle and an assembly allowed it to clamp to the archtops guitar strings just behind the bridge. .

The pickup ingeniously slides along the length of the rod, from bridge to neck to provide a variation in tonality.

The model FHC-B was sold with a 12 foot guitar cable but no volume control, and was meant to be sold with a volume pedal. 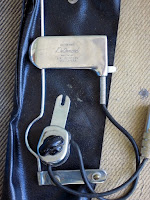 The FHC-C has a volume control housed in a small box on the cable.


DeArmond also created other versions. One was actually called The Guitar Mic.

The FHC, and Rhythm Chief was also available with a shorter, 6" pressure rod that fixed to the end of the necks bass side and extended over the body to hold the pickup.

This was accomplished by the use of 2 screws through 2 holes in the rod. The rod was attached to the upper bass side of the fretboard. This was a much more invasive installation, meant to be permanent. Both pickups used an attachment cable with a threaded female connector on one end and a 1/4" plug on the other.

Unlike today's RCA 1/4" connections these initially were called Screw-on Cables  The downside of these cable was the fact that the wire between the pickup and volume control often dried out, became brittle, cracked and fell apart or became completely stiff, rigid and useless. Some of the vintage units became unusable.

The Rowe/DeArmond Company modified their design by use of  replacing the 12 foot permanent cables and the threaded connectors with an 1/8" input jack on the pickup and provided a cable with a 1/8" plug on one end and a standard 1/4" plug on the other.


A pickup with similar accouterments, but for flat top guitars was called the Model 210. Both had adjustable pole pieces These pickups were hailed by guitarists as they were a big improvement over previous models.

DeArmond did actually create Guitar Mics, which were contact microphones that could be used for guitar, classical guitar, ukulele and other instruments. I owned a couple of these back in the mid 1960's. They sold for around $10.00 USD.


The problem with them was they picked up ambient noise. You could hear every thump and pick strum. Nevertheless, Django Reinhardt had one on his Selmer guitar.

Rowe/DeArmond pickups became industry standard, perhaps because they were among the first companies to concentrate on building guitar pickups. Even Martin guitars on the Martin D-18E and D-28E models.


Long before Eddie Van Halen and Stanley Jordan were even a gleam in their mother's eye, Harry DeArmoned developed a tapping technique to promote the sensitivity of his pickups, At times he played two guitars simultaneously.

This method was later adopted by Jimmie Webster, Gretsch's designer and endorser as he traveled across the United States giving seminars at music stores and institutions to promote Gretsch.

The DeArmond pickup became a mainstay of jazz players in the 1950s and 60s, even though DeArmond had been selling various forms of his “guitar microphone” since the mid-30s.


A notable DeArmond was the pickup that was attached to Vic Flick’s classic Essex Paragon, which he used to record the James Bond them.


Mr. Flick's Essex guitar is being auctioned this month

DeArmond went on to create some of the earliest effects units and pedals. In the early 1940's, Harry DeArmond invented the world's first effect unit for electric guitar, the Model 601 Tremolo Control. 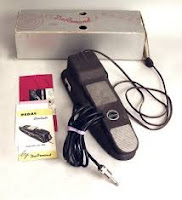 The variable frequency of the electrical interruptions action of the mechanism created a type of tremolo effect. Bo Diddley and many other artists used this effect unit. Rowe/DeArmond went on to make many more guitar pedals and effects.

Most notable are a series of volume pedals that were used by steel guitar players. The first was the model 1600 which was a very simply designed pedal.

DeArmond also invented a Pan Volume pedal which allowed a player to pan between channels or amplifiers. The model 1622 was a Stereo volume pedal.

During the late 1960's and 1970's, Rowe/DeArmond came out with a line of guitar effects based on popular models of the day, such as the Square Wave Distortion Generator and the DeArmond Wa-Wa pedal.

The DeArmond Weeper, was their version of the Dunlop Crybaby Wa-Wah pedal. DeArmond produced three versions of phase shifters including the model 1900 Pedal Phasor, the model 1920 Tornado Phase Shifter and the model 1930 Twister Phase Shifter. During the 1960's

Rowe/DeArmond also manufactured guitar amplifiers which include the DeArmond R5T which was a single end class A circuit similar to the Fender Champ, but this amp had a 10" speaker. It used a single 6V6 power tube and pne 12AX7 preamp tube.


When Martin guitars made its push into the electric guitar market it offered the DeArmond tube amplifiers branded under the Martin logo, with dark tolex and different grill covering material.

As you may know the Fender Musical Instrument Company went on a acquisition spree during the late 1990's through the early 2000's. One of the companies they purchased was Guild Guitars.

One of Fender's first ideas was to create a line of guitars using the DeArmond name which was also under Fender ownership. These instruments used past Guild designs and were produced in Korea and Indonesia under the supervision of Guild employees,

The top of the line Korean-built guitars featured USA-made DeArmond-branded pickups,however these were not actually made by the original DeArmond company.

However the DeArmond Goldtones and DeArmond 2k single coil pickups are very nice, as are the Korean made DeArmond guitars. 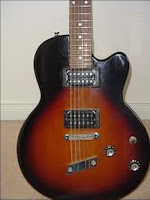 Harry DeArmond retired in 1975, by which time his company had designed and manufactured over 170 different pickups for a wide range of stringed instruments and many amplifiers and effects units.

Together with his business partner Bud Rowe, he made a major contribution to the design and development of pickups for stringed instruments and was granted several patents.
©UniqueGuitar Publications (text only)

Posted by marcusohara@aol.com at 6:51 PM

There is a chance you're eligible for a complimentary Apple iPhone 7.

If you want your ex-girlfriend or ex-boyfriend to come crawling back to you on their knees (no matter why you broke up) you must watch this video
right away...

Professional trading signals delivered to your cell phone every day.

Follow our trades today and profit up to 270% a day.

I have two Harmonys, an H59, Rocket III, with DeArmond Gold Foil Mustache pickups and a Silhouette H17 with Gold Foils. I also own a Model 210 flat top acoustic pickup which I used for years until I got a Dean Markley Pro Mag SC-1, which is so much easier to install. To install the 210 one had to loosen all the strings considerably.