I started playing guitar in 1964.  This was during Beatle- mania and the British Invasion.  By 1968, I wanted a brand new guitar.  What I really wanted was a 12-string guitar, but my Dad talked me out of that.  I spent hours shopping for guitars and one of the more unusual instruments I recall during those days was a .


Never mind that most guitars manufactured in had nylon or guitar strings.  In fact, ’s prefix of ES stands for Electric Spanish.

In the 1940’s and 1950’s guitar manufacturers that were producing instruments in and wanted to latch on to a Spanish connection.  Therefore, they came up with Spanish sounding names, such as España, Goya, and . 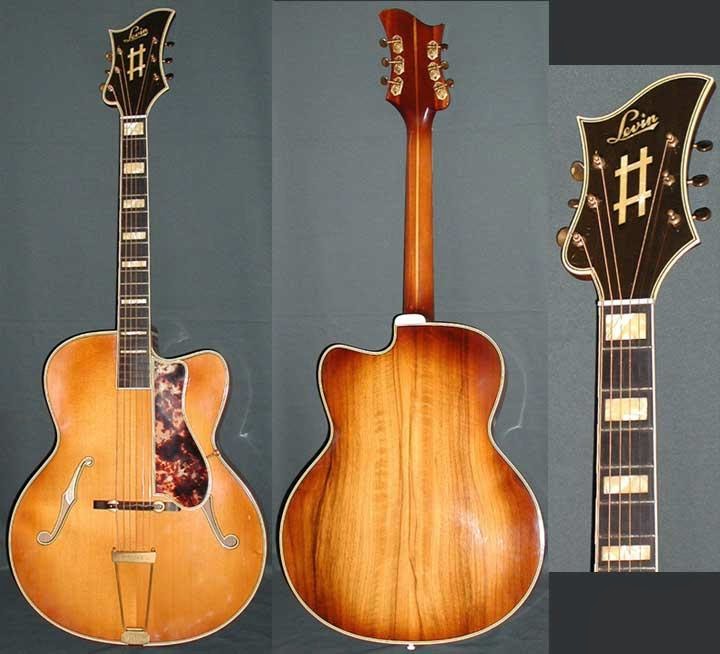 Levin Guitars of Sweden were one of the companies contracted to produce Goya guitars.

Levin started importing the guitar under the Goya name in 1954.

The Hershman Musical Instrument Company of contracted to import guitars bearing the Goya name to the United States.

Jerome  had seen Levin guitars at a trade show in 1952 and thought this would be a great product.  The H.C. Levin Company was known for its excellent classical guitars.  The company also manufactured quality flattop and archtop guitars as well as mandolins.

The Levin Company and the Hagstrom Musical Instrument Company, both of Sweden produced the original Goya guitars.  Although in the mid 1960’s Goya electric instruments were manufactured in , , and .


Hershman sold their interest in Goya to a company called Avenet. Avnet, in turn, sold the Goya brand name to Kustom Electronics of Chanute Kansas.

By this time most Goya guitars were being manufactured in .  Kustom filed bankruptcy. (see this blog about Kustom) A Chanute Kansas company called Dude Incorporated, bought out Kustoms remaining stock at a bargain. At the same time, Dude Inc. purchased the Levin guitar company's assets.

Dude Incorporated sold Levin and Goya to guitars in 1974.  utilized the Goya/Levin connection to produce its Sigma line, although Sigma guitars were manufactured in and assembled in the .  By this time the Goya brand name had an almost 50 year run.

During 1965 through 1969, Goya had come up with an interesting conception they referred to this guitar as The Rangemaster.  These instruments were mostly of Italian origin.

The Italian made Rangemaster had one or two Florentine style cutaways, twin pickups, an array of push buttons and most came with some sort of vibrato unit. The vibrato, made by the A. Hagstrom Company could be either a simple spring style unit or a modified Bigsby style.


Some Rangemasters came with a stylish non-vibrato steel tailpiece that bore the Goya logo.

The hollow body Rangemaster had two F-holes placed very far down in the lower bout.  The scale length was 25.2”.  The nut was 1.6”.  The neck and body were both made of maple. The rosewood fretboard had 22 frets.  The maple three on a side headstock had a black veneer plate with the Goya logo.  The more fancy versions came with an inlay of an Italian musician.

The bolted-on neck was bound and the body was bound in 5-ply laminated plastic.  The position markers were mother-of-pearl. The neck plates came in a variety of styles, but generally were rectangular.  The finish was either cherry or cherry-burst. 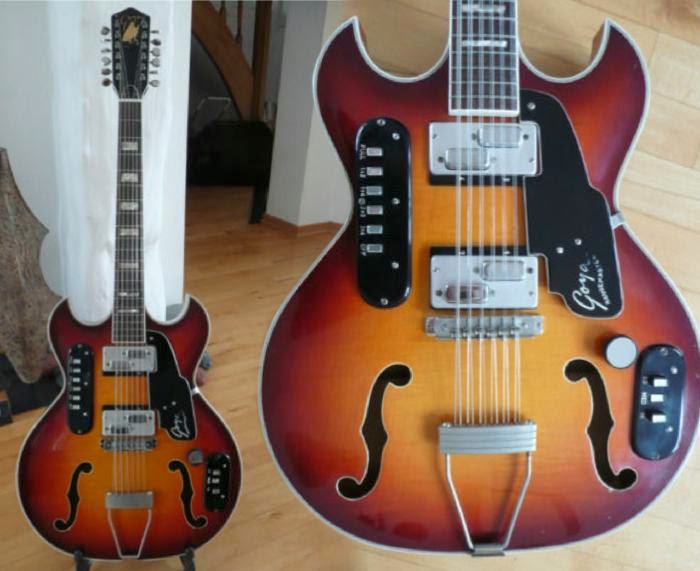 The pickup configuration was most interesting.  There were actually four pickups on the Rangemaster.  The split-style arrangement was similar to that of a Fender Precision Bass.  Pickup one was for the lowest three strings at the neck.  Pickup two covered the upper three strings.  The bridge pickups were set the same way.

A black console contained an array of push buttons on the upper bout (right in the way of the palm of your hand) controlled which pickups were on or off.

A similar console with switches for low/medium/high sounds was housed where one would expect the tone control. A single potentiometer controlled the guitars volume.

The other unique feature of the Rangemaster is the placement of the "F" holes.

Sales firms subcontracted most of these instruments and the finished products were given different brand names.  This included the Goya brand.

Accordion manufacturing firms focused on accordion design and this was evident in their guitar design.  Instead of toggle switches, they utilized single or double throw slider switches.  Many times no potentiometer was utilized for tonal changes.  This job was accomplished through a switch that activated a capacitor, which gave either a bright or a deep tone, but nothing in between.  On/off push buttons and rocker, switches were standard on accordions, so they were used on guitars.

There was a demand at the time for 12 string instruments, so Goya also sold a 12-string version of the Rangemaster.


Goya also produced a solid body version of the Rangemaster with a six on a side-elongated headstock.  It came with similar push button controls and only one potentiometer, which controlled the guitars volume.  Another Italian company called Galanti manufactured this guitar.

Probably the one claim to fame for the Rangemaster was an off stage photograph of playing one.

Somewhere during their run, Goya came out with an updated model.  The push buttons were gone and replaced by two tone pots and two volume pots.  This came with three toggle switches. The one on the lower horn was used to control the neck and bridge pickups. The pickups were still the split style version, so there were actually four single coil pickups.  The two toggles on the upper horn to control which pickups were on or off. 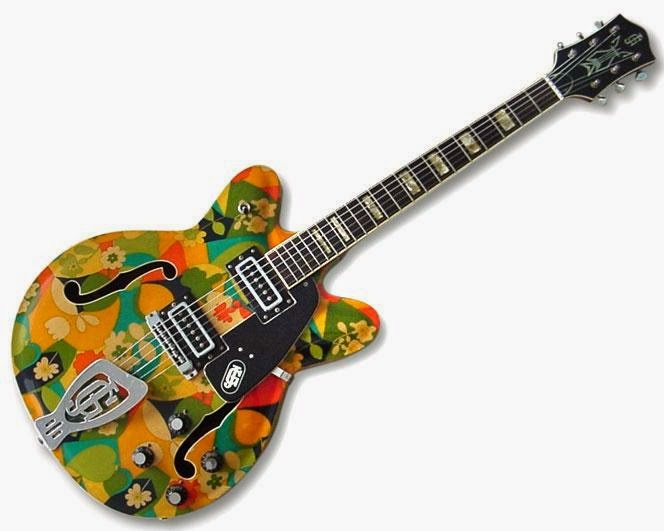 The most interesting thing about this guitar was the finish.  The entire body was covered in a psychedelic style fabric that was glued on and covered with a rich clear-coat finish.  The guitar appeared to be painted in a flower design.  Goya came out with three different versions of the finish in paisley or flower designs, which used the same guitar body.

It is unclear whether the Polverini Brothers or another firm manufactured these versions. 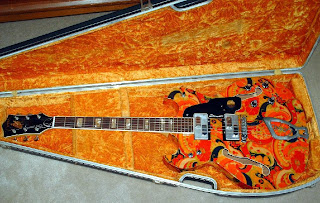 As you can hear in the clip below, the Rangemaster does not sound as solid as a Gibson ES-335 or 330, but the Psychedelic version would make for a very visual stage presence.


Posted by marcusohara@aol.com at 6:31 AM

I have one and it has been my warhorse for 20 years. I was wondering if you might know through your research of specific guitar tachs or repairmen that specialize in working on and restoring old Rangemasters.

I don't know of anyone that specifically works on Rangemasters. I would think any competent guitar tech that works on electric guitars would be able to take care of your guitar.

I owned and played one for much of the 70ies and 80ies. Got short on cash and sold it to a studio musician in Berlin, Germany.

I still have one. Got it from a buddy for $40 CDN; which his girlfriend suggested, otherwise she was gonna throw it out.

There was a big crack on the back of the head-stock, but I took it home and applied a little wood glue and clamped it for a couple of days. Solid and straight as an arrow now, and the neck has never twisted or warped one bit.

Great guitar, with very interesting sounds from the combination of pickup arrangements, and wicked soft action. Feels like a buttery Jazz guitar.

Every time I place it into the hands of a guitarist...the first thing out of their mouth is "How much do you want for it?"

idgxil43fookforBought my Rangemaster cherry red 107 back in June 1967 for $299 new. Still have it in mint cond. and it sounds great and always had great action. Bought a 12 string variety a few years back and it is very difficult to stay in tune. But my 6 string 107 is still my favorite guitar.

Get professional trading signals delivered to your mobile phone daily.

Start following our signals right now and profit up to 270% daily.

It has been said that any bettor must watch this,

Watch this now or stop betting on sports...

eToro is the most recommended forex trading platform for novice and professional traders.

Some of the chronology in this article is a little backwards. All Goya guitars were made in Sweden by Levin from 1954 until about 1974. The only exceptions were the electric guitars, which were mostly made in Italy, a few models built by Hagstrom. Goya’s acoustic guitars were never made in Japan and Korea until Martin bought the Levin company in the mid 70’s.