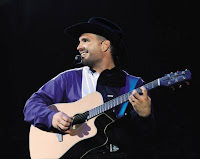 I was at my local Guitar Center last week to purchase some new strings. While there I had a chance to check out any interesting guitars in their inventory. I listed to a fellow in the acoustic guitar room who was playing a new Taylor guitar and singing. He had an astonishing voice. As he left, I complimented him and struck up a conversation in which he told me about his guitar collection. The one instrument that he was looking to add was the Garth Brooks Takamine model GB7C.

I had never really considered the Garth Brooks model as something I’d like to own, but I had to agree, it certainly is a unique guitar.

It was around 1990, at the peak of his popularity, Garth Brooks teamed up with the Research and Development department at Takamine Guitar Company to create his signature instrument.

This dreadnought sized guitar features a top made of solid cedar with a smooth satin finish. The back and sides are solid rosewood.

Then neck is made of mahogany that dovetails into the body.

The headstock is adorned with gold-plated tuning machines capped with amber plastic buttons. 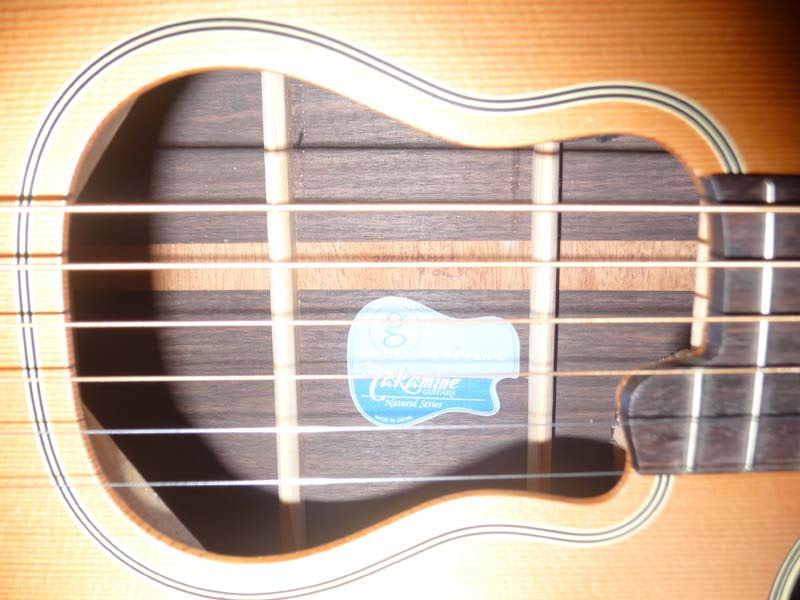 Perhaps the guitars most interesting feature is the guitar body shaped sound hole that mirrors the shape of this instruments single cutaway body and is surrounded with a rosette of concentric rosewood rings.

It is a very nice and visually appealling instrument.

Beneath the guitars twin bridge saddles is the Takamine Palathetic piezo pickup, which was created by the companies design team. This pickup is well known for producing a very natural acoustic guitar sound, even when the player subjects it to high pressure. The pickup is matched with Takamines CT4B built in preamplifier.

The CT4B preamp is designed for ease of use and purity of tone. The CT4B consists of 3 bands of graphic EQ tone control, a volume control slider and a built-in chromatic tuner. The 3 band EQ provides control over the bass (LOW), midrange (MID) and treble (HIGH) frequency response. With the sliders set at the midpoint (0) the electric signal from the guitar is evenly balanced across the frequency range.

The desired tone is then dialed in by using the sliders to add or subtract frequency response as desired. Each frequency control slider will raise or lower the band response by +/-5db. The volume slider adjusts the output volume of the preamp.

The manufacturers suggested retail price is $2079 and comes with a Takamine hardshell case. Street price for this instrument is less than $1500, which is not bad for an instrument of this quality.

I’ve written about Takamine in the past, but to refresh your memory, the company headquarters was located in Sakashita, Japan near the Takamine mountain range.

The family-run company had been created instruments to export under different brand names. This helped fuel the guitar craze of the 1960’s.

It was in 1968 that the company hired luthier Mass Hirade. It was his demand for high quality that raised the bar for the company. His classical models became very appealing to players and gave a big assist to the companies reputation.

Due to their high quality workmanship and materials, Takamine guitars could command some higher prices than most of the Asian made instruments produced by their competitors. (although the company does have a budget line up) 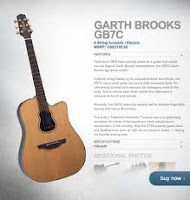 Professional musicians took notice of Takamines quality and started leaving their pricey Gibsons and Martins at home. They would tour with Takamine instruments, that could easily be replaced, but were of similar quality to expensive domestically produced instruments. 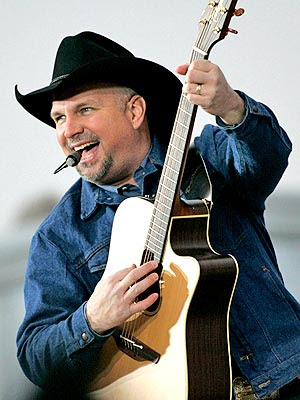 Though he was critized for smashing a guitar on a national television broadcast during the early 1990’s, Brooks praises his signature model. He states that Takamine originally provided him with 60 guitars. That number has dwindled as he was in the habit of giving away his guitar at the end of his concerts.

Posted by marcusohara@aol.com at 3:08 PM

Guitar players, in particular, have a lot of places to turn for video, audio, and graphical teaching tools.

Generally, the base material for Bags is leather. These are the honest simulations of the authentic designer ones. Another place to look at are vintage shops and thrift louis vuitton store which are located around the city.

Good!Thanx a nice article .Welcome to visit us! And, our site makes it very easy and inexpensive to get the
cheap jerseys china, cheap nfl jersey,
Cheap NFL Jerseys,discount NFL jerseys,wholesale cheap mlb jerseys,cheap nba jerseys ,and related products. All of our jerseys are 100% stitched and Embroidered,never screen printed so the quality is guaranteed. You can place order directly on our http://www.cheapnfljerseysviews.com for the jerseys you like. And then settle payments by paypal or Western Union.

Nice!!No matter what team you root for, We has something for you.As a dedicated online MBT Shoes retailer, we provide our customers with a great variety of quality mbt shoes sale at the most competitive MBT Healthy Sports MBT Shoes From mbt shoes outlet, 70% OFF Discount, Welcome To Our mbt sandals sale Store!Free shipping BOTH ways on mbt shoes, from our vast selection of styles.

I remember first playing that guitar at Georgetown Masters in the early 90s. Denny had a fantastic guitar collection but this acoustic stood out. Of course it was signed, Denny had mastered the bulk (if not all) of Garth's catalog at this point. I used to really enjoy taking that one off the wall and playing it. I haven't played one since then so I don't know how they've aged.

His job demanded he make trips abroad with these sweet nothings. Women would usually prefer an inexpensive token that means a lot more to an sexy lingerie that seems completely impersonal. see more about sexy lingerie at: http://www.sexylingerie-us.com/

Hi there does anyone know what strings are used on the takamine Gb7c series guitar as I'm not sure. I think it is d'darrios but not sure what exactly.

Brendan, they are D addario EXP16

Professional trading signals delivered to your mobile phone every day.

Start following our signals NOW & gain up to 270% per day.