I have reviewed some weird guitars in the past, but these guitars are just downright bizarre.

Some of the guitars were handmade and I suppose the builders were expressing the artistic side of their creation.

What were the folks that work for guitar production companies thinking since they have to weigh the cost of creating a product to make certain that it will sell against just being creative.

There has not been much of a collector market for Fender Katanas or Gibson Corvus'. Thinking back, there wasn't much of a market for those instruments when they were first offered.

May I present 25 of the most bizarre guitars I could round up. 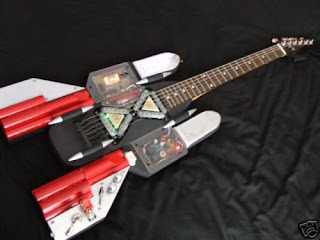 I have no idea who made this one-o-a-kind Star Ship Cruiser with triangular pickups, missiles and a lever to beam-me-up-Scotty. I might be wrong, but I bet the builder memorized every episode of Star Trek and Star Wars. 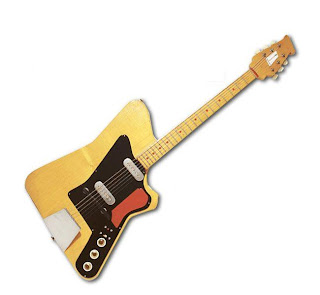 This U.K. model is a Burns Stream-liner offered for sale in 1959.  It is reminiscent of Kay guitar offered in the 1960's. Jim Burns made some wonderful guitars and is considered the Leo Fender of Britain. But he did make a few guitars that were just plain silly looking. 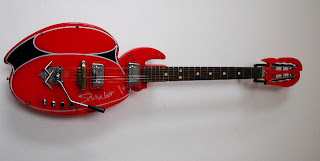 Antonio Pioli was an Italian sculptor and guitar manufacturer that built guitars in the 1960's. His nickname was Wandre. He made some really unusual guitars. Check out Buddy Miller sometime. He plays Wandres. This bug shaped guitar is just downright buggy.

This is a 1965 Gretsch Astro Jet model 6126. I think the company was struggling at the time and attempting to find a marketable instrument. This looked like someone thought, "Hey let's start with a Gibson SG design and add a huge swollen upper bout. And put four tuners on one side and two on the other. That way we won't face a lawsuit." Despite being somewhat bizarre, it is a very nice playing instrument. 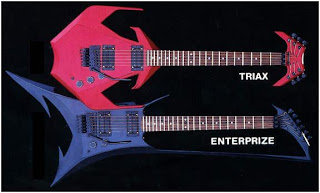 Kramer guitar offered these bad boys for sale in 1986. I cannot imagine they sold many of these guitars. Actually I don't think they were ever offered to the public. They are flat out ugly, but I will give them kudos for making the pointiest guitars ever produced. 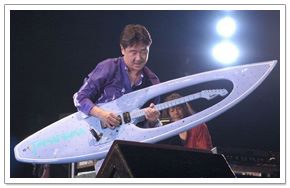 I haven't got a clue about this instrument. Is it a guitar? Is it a surfboard? Why? I bet the guy is playing Wipe Out.

Another Kramer model. I wonder who commissioned it?  Not only is it bizarre, but part of the "M" would be sticking in the face of the player. Where does the strap go?

I do not know anything about this guitar. It looks well built, but in my humble opinion it is uh...bizarre. 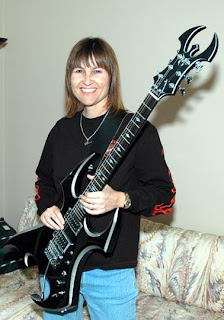 This guitar is played by Sarah Spisak.  Sarah is very attractive and has a big smile, but that guitar??? It looks like something Paul Stanley would play in KISS. The guitar is made by luthier Neal Moser and is the Spawn Model.

This guitar might be a metal-heads dream, but in my opinion it belongs in the "what-were-they-thinking" butt-ugly category. It looks like the rear end of a 1959 Cadillac Eldorado. 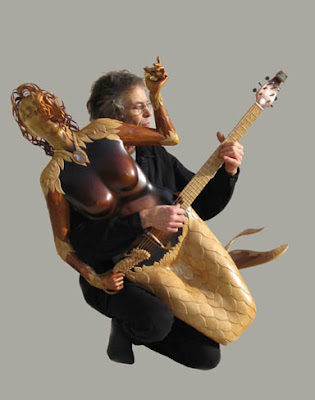 Hey dude, would you and your lady friend mind getting a room. Oh, you say that is your guitar? Excuse me. This the Mermaid guitar by Andy Manson. I'll give kudos for this bizarre creation to Mr. Manson for being an excellent luthier and sculptor. 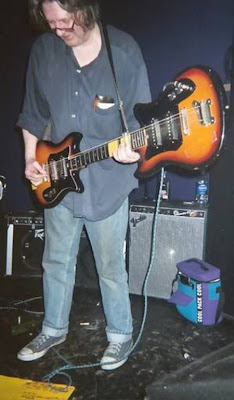 This guitar or guitars is just wrong on so many levels. I have never seen conjoined guitar twins. It looks like two 1960's Teisco guitars glued together at the neck.Where are the tuners?  Note the Fender Bantam amplifier. 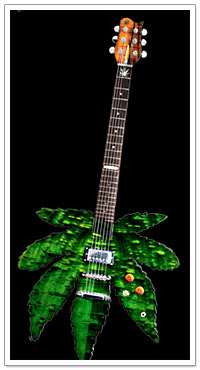 Whoa man, like far out!  Jerry Garcia should have checked this guitar out. It does make a statement, but is ugly. You can only play it legally in California, Colorado and a few other states, but you need a prescription from your doctor.

I cannot tell from the picture, but I would this to be a  guitar, judging from the neck inlay and pointy headstock. I for one am happy the age of pointy guitars and boy bands has ended.  Not a very pretty guitar indeed. 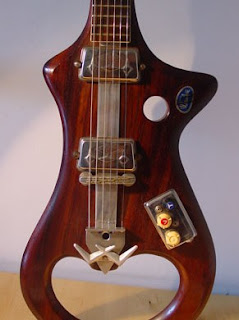 Here is another Wandre. Mr. Pioli is two for two in the strange-but-true guitar category. 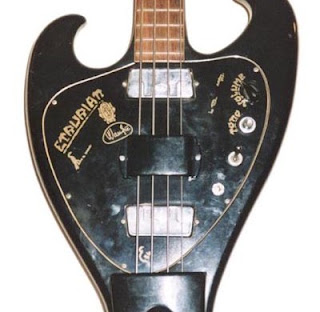 And yet another Wandre. This one is a bass model called the Eturian. There appears to be a little atomic explosion above the name Wandre.  Not an attractive or desirable instrument in my opinion. 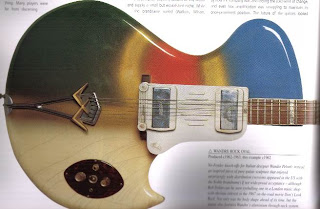 Wandre scores again with this guitar. It looks like a puzzle that is missing a piece.

I must be intoxicated since this guitar looks like a Stratocaster does when I am hallucinating.  Even the position markers are messed up. It was created by Brian Eastwood (no relation to Eastwood Guitars.)

I dearly love Eastwood Guitars. Those folks have updated and reissued some of the finest old guitars, thus paying tribute to the manufactures history. This is the Eastwood Pete Shelly Model.  Uh, Pete..? Have you noticed the upper half or your guitar is missing.  I give it a big thumbs up in the bizarre category. 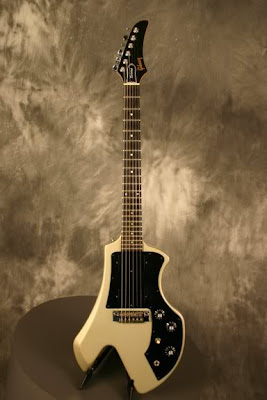 I have no idea what the design team at Gibson was thinking when they created The Corvus.  BTW, The Corvus translates to The Crow.  I understand the guitar is a delight to play, but talk about the ugly stick!  The good thing about the Corvus is that it can also be used to open a bottle of beer.

The Italian accordion manufacturer Zero Sette, made guitars for Goya. Many were done in the ES-335 style, some had push-buttons like the kind found on a Waring Blender. This is the Goya Zerosette model 1092P Psychedelic model. The finish is horrendous. 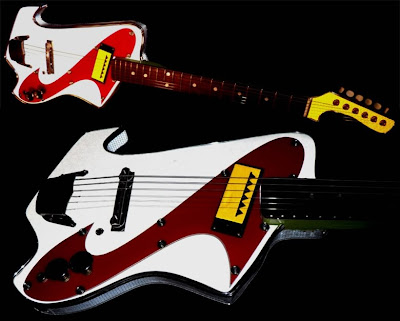 This is an El Daga Art Guitar. It is possibly a Teisco Zenon that was hacked up. In my opinion it is a bit of a hack job. 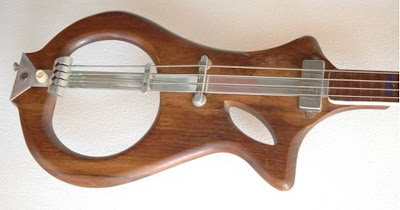 Once again Mr. Pioli aka Wandre takes the prize with this Rockbasso. It is worth pointing out, the aluminum neck runs the length of the body. The single volume control is mounted on the tail piece. 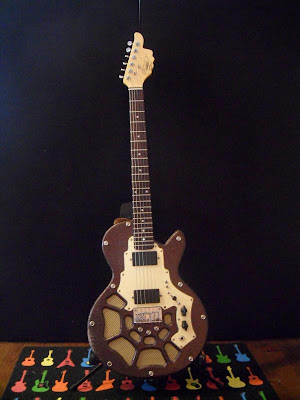 What we have here is a Lindert Conductor guitar. The body is medium density fiberboard with tweed cloth panels. Why couldn’t Mr. Lindert have stopped there. He just had to put his patented “thumbs up” headstock design on the guitar! 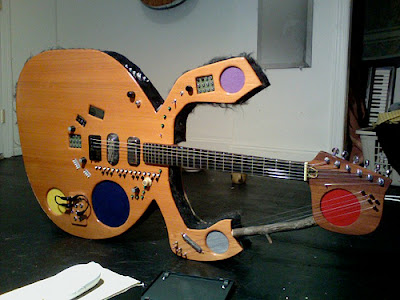 Ben Simon and his "Guitar2-D2" can often be found on the Bedford Avenue L train station in .

Perhaps onlookers at stops on the L train and in are so in awe of Simon’s creation that they forget to drop money in his basket; the massive robo-guitar is indeed quite a sight.

Sporting five speakers, about 70 buttons, 10 dials, the guitar creates a musical cacophony unlike any — judging by onlookers’ faces — heard before.

Posted by marcusohara@aol.com at 10:34 AM

You could have included Prince's as well, I think.

You could have included Prince's as well, I think.

Get professional trading signals delivered to your cell phone daily.

Start following our trades today and earn up to 270% per day.