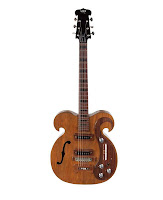 This guitar was used by The Beatles during the making of the "Magical Mystery Tour" video and will be going on the auction block...again!

Played by both John Lennon and George Harrison during video shoots and rehearsals, it is expected to go for between $200,000 to $300,000 when Julien's Auction House brings down the gavel this upcoming May.

The guitar, which appears to draw inspiration from early Paul Bigsby models, is a hollow body made of mahogany, and has an f-hole and 6 push buttons for special effects.

It is sometimes referred to as a Vox "Kensington" and is a one off model that was a gift to John Lennon from the Vox Amplifier Company.

If the name Vox Kensignton sounds familiar, it is because when JMI/Vox was purchased by the Thomas Organ Company, Vox/Thomas offered a solid state bass amplifier known as the Kensington. 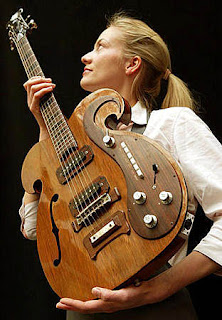 There were only a handful of Vox guitars made in their Dartford, UK facility.

Most Vox guitars, including the more popular ones, were made in Italy by the Welson Company and later by the Crucianelli Company.

This is only one of these models created. It was hand made by luthier Mike (Mick) Bennett.

The guitar is a hollow body and made from mahogany. It was displayed at a trade show in 1966, before the additions of the “push buttons” which were added in 1967.

Lennon gave it to Alex Mardas aka MagicAlex as a birthday present. Alex, a Greek immigrant to the had befriend Lennon in 1965. Magic Alex was in charge of electronics for Apple Electronics/ Apple Records. 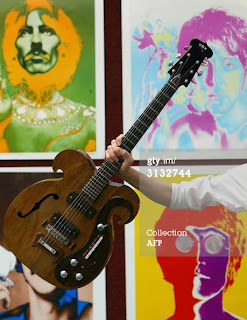 This guitar was last auctioned at Christies in 2004.

Posted by marcusohara@aol.com at 1:24 PM