For my Friend David Aldrich. Thanks for the music and thanks for The Gorey Stories. 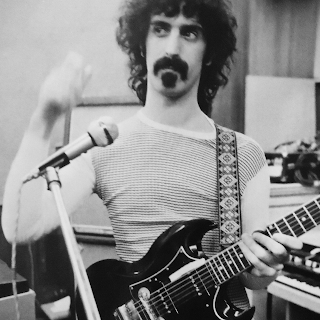 Frank Zappa was the father of The Mothers of Invention. He was a musical genius, an outspoken protagonist of Tipper Gore, a composer of rock as well as symphonic music, a conductor, an arranger, a father, husband, bandleader, humorist, registered trademark and a damn fine guitar player.

To celebrate the life of Frank Zappa Gibson Musical Instrument Company has recently unveiled The Zappa® "Roxy" SG guitar which was inspired by the modified SG that Zappa used in live performances. Only 400 units will be available.

The new Zappa SG features two ’57 classic humbuckers that are routed through a pair of mini toggle switches which provide coil splitting and out of phase capabilities for each pickup. This is just like Frank’s original SG.

The instrument comes with a slim 1960’s style bound neck that is topped with a blonde headstock.

At the opposite end the strings are anchored to a Maestro Vibrola. The guitar has a Gibson Tune-O-Matic bridge and on the headstock are a set of Grover tuners.

The body is made of solid mahogany, as is the neck. The 22 fret neck is topped with a rosewood fretboard with dot inlays and a natural finish on the head-stock.

Frank gave his original guitar the nickname of Roxy.  Frank’s son, Dweezil Zappa was very instrumental in assisting Gibson in the build of this guitar.

Zappa’s original SG Special was an early ’60s model with the slim neck that was popular at the time and a stock smaller pickguard. His pickups were P-90’s, which were original equipment.

Like many other guitarists, Frank was after “a sound”, hence the addition of the toggle switches and electronics that gave him the signature ‘out-of-phase’ sound that is heard on many of his recordings.

In an interview his son Dweezil tells us that Frank rarely used anything stock. For him it was all about getting the right midrange and controlling feedback. Some of Frank’s guitars even had onboard preamps. However the Roxy was not one of them.

The younger Zappa states the Roxy guitar was once damaged by an airline. It was at this time Frank took it apart and started adding the electronics.

One of the tools that Zappa used frequently was the Pignose Amp, to get some of its classic overdriven sounds. Frank modified the Pignose by adding two XLR jacks on the backside.

I was fortunate enough to see Zappa and The Mothers of Invention play live concerts on two different occasions. Both were at the same venue, The Taft Theater in . The concerts were about a year apart.

At the time I was in high school and playing saxophone. I was enamored with the fact that Frank’s saxophone and trumpet player were using Maestro Electroniceffects that were designed for those instruments. But I was not distracted enough to notice Frank was playing an SG.

To my young eyes this guitar looked like a distressed Gibson SG. It even bore a Gibson logo on the black headstock. However there were numerous switches on this guitar other than the usual pickup switching toggle and the four knobs. Although is looked like a Gibson SG,  the guitar was in fact a very well made copy of a Gibson.

The Baby Snakes SG was the creation of “a guy in ” who somehow made his way backstage at a Zappa concert, with the intent of selling this guitar he had made. Zappa bought it on the spot for $500. No one is certain whether or not Zappa knew it was a forgery.
">

The Baby Snakes guitar looks like an SG, however there are some significant differences, such as a 23 fret neck with some unusual inlay. There is also some ornamental woodwork on the guitar’s body. And no one looking at it could miss all those toggle switches.

In addition to the pickup switching toggle, the guitar included a boost switch, an out-of-phase control switch, two split coil switches and an EQ booster switch. One of the switches may have controlled a Dan Armstrong Green Ringer (ring modulator) that would have been installed in the body cavity.

Frank Zappa was friends with Jimi Hendrix. Both musicians played at the Miami Pop Festival where Jimi torched his Stratocaster as part of his act. One of Jimi’s roadies gave the remnants of the guitar to Frank. The neck and electronics were burnt beyond repair.

Frank hung the guitar body on his wall for a long time and then decided to rebuild the instrument. He added some custom electronics which include a parametric EQ, a  Barcus Berry pickup attached to the neck and a preamp. 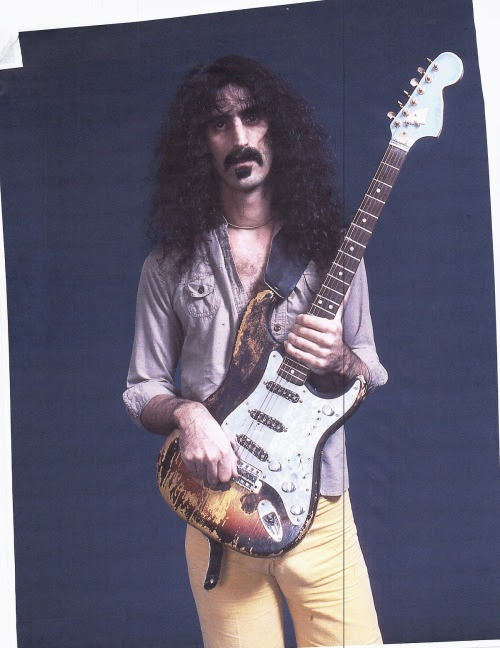 By some accounts, the story of the Strat states that Rex Bogue, who was a well known luthier, was the one who rewired the guitar.

Zappa used the Stratocaster on stage and in the studio. At some point he quit using the guitar and its whereabouts remained a mystery.

Frank’s son Dweezil found it in a stairwell in Frank’s home recording studio. The guitar was in pieces. Dweezil asked his father if he would like it restored. Dweezil took it to his friend Jay Black, who was with the Fender Custom Shop at the time. Black put on a tortoise shell pickguard and Lindy Fralin pickups using traditional Fender wiring. He also add a new neck with a reverse Fender Strat headstock.

Dweezil presented it to his father as a birthday present.  Later, Frank gifted it to Dweezil.

Although Frank Zappa was a fan of the diminutive Pignose, his choice on stage amp was a 100 watt Marshall JMP head through various speakers. For recording Zappa employed a Fender Deluxe.

There were other guitars associated with Frank Zappa. He owned an ES-5 Switchmaster that was featured on some early recordings.

Zappa also owned a Les Paul Custom guitar that had a Dan Armstrong Green Ringer installed in the body cavity. An extra knob was added to this guitar which was actually a nine position rotary switch. This allowed for split coil and out-of-phase sounds, as well as series and parallel options.

Zappa owned a Martin D-18S 12 fret guitar that he used on a few of his recordings. The “S” stands for slot-head. The 12 fret body is larger than a dreadnought, so the sound is bigger and warmer. Frank acquired this guitar from the Turtles lead singer, Mark Volman. Zappa fans should know that Volman and Howard Kaylan of the Turtles, became Flo and Eddie and started in Zappa’s band.

During Frank’s final tour he utilized a Performance solid body guitar, which was made by Performance Guitars of Hollywood, California.  This guitar was fitted out with lots of bells and whistles in the form of tiny trim-pots that were adjustable with a tiny screw driver.

These potentiometers were able to tweak the tone that Frank needed. Two of the pots were for bass and top end frequencies. The guitar included a variable resonant frequency adjustment or a “Q” knob that allowed Frank to control feedback characteristics based on the size of the room he was playing.

Frank's music is not something you would hear on most radio stations. It is orchestrated, tempos and time signatures change.

The vocals...well they are different. To some degree it is part serious and part  parody. Frank surrounded himself with fine players, that could read music. The names of his songs/works are humorous and so are the lyrics. Below is a mix of Frank's genres.

Posted by marcusohara@aol.com at 7:20 PM

mick ekers' book "zappa's gear" is in the final stages of preparation. he has had full zft cooperation and access to zappa's gear, and for zappa fans this is something to look forward to. http://www.zappasgear.com

Sally B, thank you. Knowing Dave was a treat. Knowing you is also a treat my friend. I hope all is well with you and yours.

Antal, I look forward to Eker's book on Zappa. Thanks for the update.

Love Zappa and I wish I could find more of his albums here. When he died he had released something like 36 albums I think, but I forget the exact number. I don't know how I feel about the signiture model seems like dweezil might be cashing in.

Teds Woodworking has over 16,000 woodworking plans with STEP BY STEP instructions, pics and blueprints to make each project very easy...

Get professional trading signals delivered to your cell phone daily.

Bart Nagel build the Baby Snake SG - if the internet is right. And he get $600 from Zappa.