Most of us know that Leo Fender was not a guitar player. After his job as an accountant did not work out, he borrowed some money and started his own business as a TV and radio repair man.  Shortly after this and before building his first six string standard solid body "Spanish" guitar, Leo was supplementing his income by building slide steel guitars and amplifiers. His original designs were fairly simple, but professional and I am certain he was aided  in this endeavor by his friend Freddie Travares, who was a rather good steel player.

It has recently been pointed out to me that a lot of people carrying on Leo’s tradition by building their own lap steel guitars. Some of them rival professionally made instruments and some are very primitive. But they are functional and seem to bring a lot of joy to the builders and players. 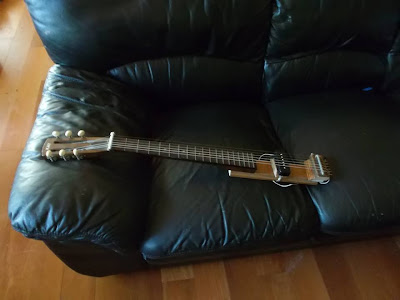 Recently a friend sent me some pictures of a simple homemade slide steel guitar he had made by using some scrap wood, an old guitar neck, a pickup, some wooden shims, a rubber band and what appears to possibly be a religious tract. The design is much simpler than Leo's first shot at building a steel guitar, but it is functional. 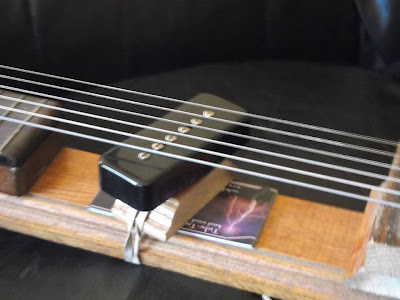 My friend said he was tired of lugging around his double neck pedal steel every night and setting it up, then taking it down, so he built this instrument. (Check it out in the video below)

In looking around, I find there are plenty of other slide players that have homemade instruments that use everything but duct tape to build their guitar. (Although I bet someone is using duct tape.)  So I thought I would share a few of these unique instruments.

I don’t think Sho-Bud/Jackson or MSA have anything to worry about and Red Green would be proud.

This model, made by Darren Landrum, uses door pulls for bridges and saddles and a cupola style drawer pull for the tailpiece. The body is made from a piece of scrap wood. The tuners are inexpensive Schaler-style guitar tuners. The pickup was given to the maker from a friend and is wired directly to the output.  The maker states he wants to add 'fret' lines on the neck.

This one is made by a fellow in a duo that goes by the name Stumblecol. They hail from in the and seem to be into making cigar box guitars and other homemade stringed instruments.

This one is referred to as The Plank, which is a fair description of the guitars body.

The ‘Star’ markers cover screws that hold a steel back plate for strength. As a plus the back plate resonates and enhances the sound.

The pickup is made from a ‘stoners tin’ and the bridge is from a hash pipe. In the tin box are two homemade piezo pickups wired to the volume and tone controls. The nut is made from a small branch off of a cherry tree. The tailpiece is off of an old archtop guitar.

Look closely and you can see the strings are three courses tuned in octaves.

The next three guitars, including the one above, were built by Ken Rodgers who went into sticker shock when seeing what old lap steels were going for on eBay. He thought, I can do better than what they are selling. And I'd say he certainly did.

The instruments are beautiful. This odd looking lap steel pictured below and made by Rogers features a body that was turned on a wood lathe.

Interesting concepts. I think Ken should go into business.

Above are a couple of instruments built by guitarist and woodworker Allan Brisley. The upper one is a nice handmade six-string model lap steel guitar and the lower is a one string diddly bow with a homemade pickup. The six string model has bridge saddles similar to those on an old Telecaster. 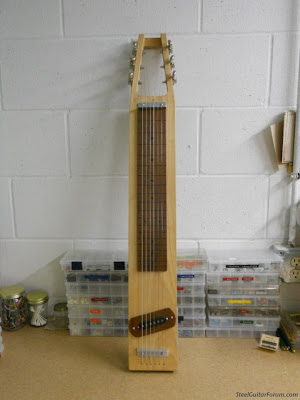 Featured above is a homemade lap steel from a fellow named Frank James Pracher. The wood plank he used for this guitar is 90 years old and was taken from an old Catholic boarding school that was being demolished.  The tuners are off a broken guitar. The fret board is made of a piece of walnut scrap wood. The fret lines were made using a wood burning tool. The nut and bridge are angle aluminum. And the pickup is off of an old Kramer guitar, with a walnut surround. 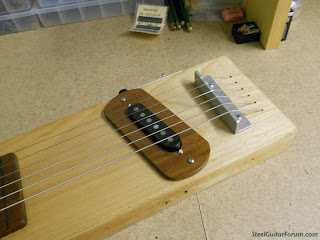 There is a volume knob and output on the guitars side.  In my opinion this is an excellent project.

Dave Begalka decided to put away his Emmons for gigs. He now plays Country music on this souped up 4 by 4 lap steel guitar and gets plenty of attention and comments. 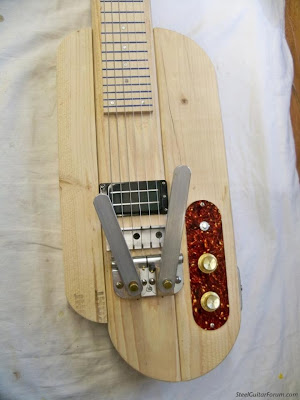 The fretboard is made of plywood with frets drawn on with a fine tip blue Sharpie. For position markers, Dave used nails. 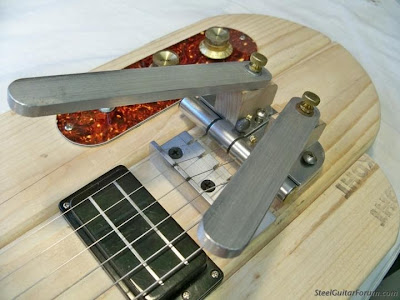 What caught my eye was something that looked like a Bigsby palm pedal. In fact it is a homemade device he designed utilizing two aluminum door hinges. The levers are also made of aluminum. The screws that hold the levers onto the hinges act as adjustments so the player can achieve a whole note interval. Dave can depress the B and D levers to pull the strings up to C and D.

This one was made by steel guitarist Dave Certano. It sounds amazing!

Posted by marcusohara@aol.com at 7:49 PM

Guitars don't have inputs, they have outputs. Just saying.

MMM... Leo never did any military service. He had a disability... almost blind in one eye and deaf in the other... besides, he was born in 1909, too young for wwi and too old for ww11

This is where it all starts! My friend owns one similar kind of workshop near his place and he calls is a musician utopia. He keeps on tweaking the classic piece of guitar to come up with something as unique as this. Whenever I get time, I just hang out to imbibe in the cathartic effect that guitars offer to me.

Thanks for all the comments. I made the appropriate corrections. I don't know how my 'editor' let those slip by. Thanks especially to Raybob Bowman, a wonderful steel player and a childhood friend for posting his homemade steel on Facebook.

great post, more people should do it! I made a little lap steel. It's a bit of a plank but sounds killer! just a guitar pickup, some tuners and a couple of doorhandles. I might try and make an 8 string if I get a suitable pickup

Teds Woodworking has more than 16,000 woodworking blueprints with STEP BY STEP instructions, pictures and drafts to make every project smooth and easy...

Get professional trading signals sent to your cell phone daily.

Hey everybody, If you love building sheds like me, here's a great link for you to download shed plans: