For guys and girls my age, it is hard to believe that February on next year marks the 50th Anniversary of the Beatles first visit to the United States. This event that lives on in the heart and mind of all Beatle fans occurred on Friday, February 7 of 1964.

The following Sunday night, millions of us turned on The Ed Sullivan Show to get our first glimpse of the group that was playing all those great songs.

During that visit they performed at the Washington D.C. Coliseum, Carnegie Hall and once more on Ed Sullivan’s variety show before heading back to England.

For many of us this was the impetus to learn to play the guitar in hopes that all the little girls would be screaming for us when we became rich and famous rock stars.

What lies buried in history is the fact that for one of the Beatles, this was not his first visit to the United States.

In September of 1963, the Beatles, although well known in the U.K., were relatively unknown to America. This event was about to take place in just a month or so. John and Cynthia Lennon were off on holiday in France and Paul and Ringo took off on holiday to other parts of Europe. George Harrison and his brother Peter flew to the United States to visit their sister Louise Caldwell who was living in Benton, Illinois.

The brothers had it in their minds to hang out with some American musicians, go camping, play music; essentially learn about life in Midwest America.

George did get to jam with a local band at a VFW Hall, hang out with his sister and brother-in-law at the  and was interviewed by a radio station. But what I want to concentrate on is the guitar he purchased at a music store in Mt. Vernon, Illinois.

George’s sister was friends with a local fellow named Gabe McCarty. Gabe was a bass player with a group called The Four Vests. Louise thought her friend would enjoy meeting her brother George. In fact this was the group that Harrison sat in with. George spent much of his visit hanging out with Gabe and playing guitar.

It is of note that both Harrison and Lennon became interested in Rickenbacker guitars because of a well-known jazz guitarist Toots Thielemans played a Rickenbacker. Toots is better known for his harmonica playing, which also influenced Lennon, but that is another story.

There are only a few photos of Harrison playing this small bodied guitar. He did not like the red finish and had it repainted black to match Lennon’s instrument. Lennon’s Rickenbacker was painted by James Burns of London, owner of the famous Burns Guitar Company.

According to reports, Red Fenton, the owner of the music store agreed to paint the guitar with black polyester paint. Harrison picked it up a week later. George spent $400 US dollars for this guitar. 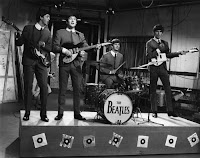 The only remaining video showing George playing this guitar is an October 1963 appearance on the rock show, Ready, Steady, Go. The guitar was used a couple of weeks later on a British series called Thank Your Lucky Stars. Harrison also used the guitar on a Beatles tour of Sweden and a British tour in November and December of 1963. 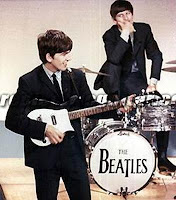 While the Beatles equipment van was parked outside of a theater in Glasgow, some of their equipment was stolen, including George’s Rickenbacker 420. It was later recovered, but by then Harrison got another Rickenbacker. 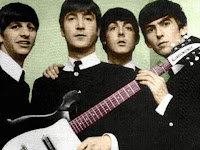 This one was given to him while the Beatles were in New York City. F.C. Hall, Rickenbacker’s President made an appointment to visit George at the hotel the Beatles had booked. It was there that Mr. Hall presented Harrison with the 1963 Fireglo Rickenbacker 360/12 guitar that Harrison used throughout his career.

Sometime in the preceding years, Harrison modified his Rickenbacker 420 by adding another pickup and a switch. Rickenbacker made a two pickup version of this same body style. It was known as the Rickenbacker 450. Note that Harrison's guitar does not have the same control layout as a model 450.

Years later, in 1971 Harrison gave the 420 to one of his old Liverpool friends by the name of George Peckham. Peckham played in a group called Earl Royce and the Olympics and later in a more famous band known as the Fourmost. Peckham’s group was to play on the British TV show, Top of the Pops and Peckham had no guitar.

Harrison loaned him his hand painted Stratocaster which he called “Rocky." After Peckham had returned the Stratocaster, Harrison gave him the Rickenbacker 420 and let him know it was “a great rhythm player.”

Peckham kept the guitar until 1999 when he put it up for sale at Christie’s Auctions. The guitar garnered the US dollar equivalent of $90,000.

It apparently is now in the collection of Sharon Mineroff, who has loaned it to the Cleveland Rock and Roll Hall of Fame.

George’s guitar was a very simple version with a large white plastic pickguard and one Rickenbacker “Toaster” pickup. The knobs on his may have been changed. The standard knobs for that guitar were made of black plastic.

Rickenbacker made the model 420 from 1958 to 1973. The designation “20 or 25” on any of the Rickenbacker guitars indicates it is a ¾ sized instrument. John Lennon’s 325 had a short neck as both guitars came with 21” scales. John's guitar was a model 325, meaning it came with a vibrato. The addition of "5" was the code Rickenbacker gave to vibrato equipped instruments. George's guitar did not, so it was originally a model 420.

The “Cresting Wave” body shape with a Rickenbacker original and designed by Paul Barth, who was also responsible for the Capri Style 325.

Many Rickenbacker guitars are made by routing out a solid block of wood to produce the guitars front, then routing out sections for the, controls and a neck slot.

The neck block is glued into a good section of the body. After that a back is glued on.

Rickenbacker no longer makes models in the 400 series. The only models with the cresting wave shape are the 620 series in a six or 12 string version. However the 620's come the longer 24 ¾ “scale neck.

George’s guitar was a very simple student model with a large white plastic pick guard. His older friend and band mate, John Lennon, modified his Rickenbacker, by having it painted black, adding a white pick guard and a Bigsby vibrato. It was natural that George would have his Rickenbacker modified. He even changed out the knobs.

For the short time the Beatles made music together, this is a seldom mentioned, but most interesting anecdote.

Here is an interesting story about a Rickenbacker 420 made for the British guitar market. It was labeled as a Symphonia guitar

Posted by marcusohara@aol.com at 8:43 PM

Yep, Red Fenton once mentioned a Beatle coming by. Red was full of stories and a very interesting fellow. I once worked for him back in 1982 and lived in his basement for a month or so.

Joel, how cool is that?!

Also, there are some full scale Rickenbacker guitars that end in 20 or 25. For example the Model 620 and the model 625 are full scale guitars.

Start following our signals right now & make up to 270% a day.